PJ Maximum wrote a compelling and disturbing post about the m

ost important thing in American society today. The success in the war on terror.

She goes on to postulate that without success in the war against Islamic fascists, all is lost.

Well, I have a dissenting opinion. The most important thing is NOT the success in the war on terror, but instead it is keeping McDonalds from removing the McRib sandwich from the menu. 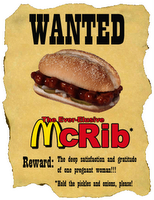 Imagine if we invested a paltry million dollars in McRib sandwiches and then dropped them into Iraq or Iran or Darfur with little bitty parachutes. The people would be happy because they'd be getting free meals from the sky and we'd be fighting terror by driving the Islamic fascists out of the areas that we carpet bomb with the tasty McRib.