Jimmy Carter the doddering old fool that he is, wrote a book "that Ah didn't wahnt ta write" but "felt it wahs necessary because of the silence ahbout the Palestine/Israel situation.

Basically his premise is that leaders from Israel and Palestine should sit down and "work out their differences". 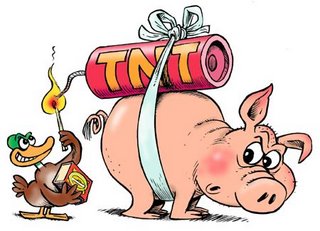 These pigs will be loaded with explosives and crash into high rise apartment buildings filled with Joos.

An interview with Achmed Fuq-alsheektard revealed:

Jimmee Carter shows us that even though the hated American Jews will continue to inhabit our rightful lands, there is hope that we, the freedom fighters of Hizbu'llah, can, with Allah's help - find a way to kill more Jews. The hated evil (death to) America(n) people have plenty of riches. Which we will take. And though the infidel doesn't mind eating the flesh of the most unclean animal, we, the freedom fighters of Hizbu'llah can use this unclean animal to attack the Jews in their homes.

Scientists in France assisted members of the Palestine delegation of Pig bombers to inflate the bladders and stomach of the common barnyard pig with a superlight gaseous substance which allows the pigs to achieve a lighter than air state.

Jimmah Carter had no comments on the Pig bombers plans for Jewish destruction and instead chose to stick his head back into his anus. Saying "Ah just feels more comfortable with my head in yonder".