Truther's have tried to pull yet another fast "absolute" conclusion without actually analyzing the video to see if their claims are correct. Their claim:

"You can't see a plane, so it had to be a government cover up."

One thing is missing from that statement. You can't see The Pentagon either. I-395 completely blocks the view of the Pentagon from the hotel.

The height of the Pentagon is 77 feet 3.5 inches the entire way around it's perimeter, in all rings. The tail height of a Boeing 757 (while resting on the ground with landing gear down) is 44 feet 6 inches. The pentagon is 32 feet 8 1/2 inches taller than a standing 757, not to mention the fact that the 757 which hit The Pentagon had hit the ground. So the fact that you cannot see The Pentagon means that you will not be able to see a plane either.

If you'll look at this graphic, you can see the camera's view angle in relation to the flight path which 77 took. 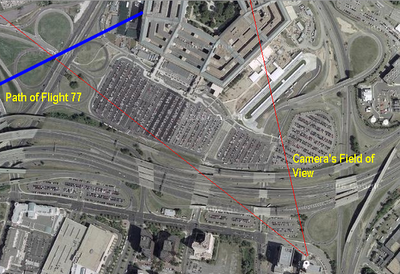 By the time the plane had gotten into the field of view of the camera at the hotel, it was already low enough to have clipped/severed the poles on Washington Blvd. Also, note that Washington Boulevard dips BELOW Interstate 395, meaning that Flight 77 could have been even further below the field of view.