The Get Stewed Newsmonger News Team has uncovered secret documents from the Dean Headquarters on the upcoming plans to win voter support in the upcoming election.

"With the economy surging, the increasing problems making us look bad in Iraq and the downright underhanded tactics of the Republican leadership, we must take bold moves to align ourselves with the American people." 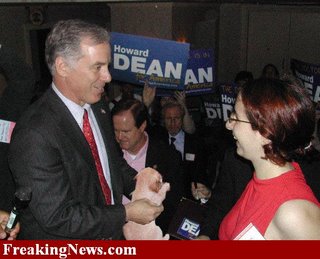 Introduce puppies in all areas of Democratic punditry. Case in point:
It's one thing to say "the economy is faltering" (while numbers show steady increases in earnings and revenue). But let me tell you, you do this WHILE HOLDING A PUPPY and people will be much more likely to ignore the facts and focus on the cuteness of the little dog.

The use of cute and furry animals in politics is not a new thing. Bill Clinton, for instance, has utilized Hillary in this capacity for years now. Then there's Nancy Pelosi. Well, okay forget about her.

Regardless, this comes as a departure from some of the Democrats previous dealings with cute and furry animals. Especially Howard Dean... 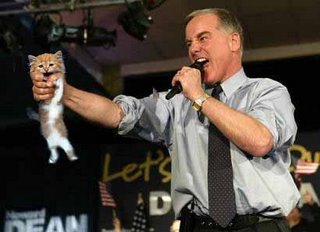