... that Arabs are being mistreated in America

10. When Al Gore grew his beard, the male population of America failed to follow suit. 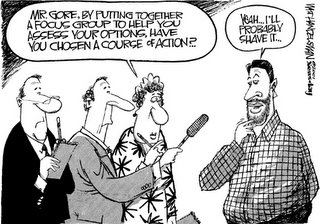 9. "Guest Worker" program is not scheduled to include Arab males with a talent for beheading.

8. What's wrong with having an "addiction to oil?"

7. Tennessee barbecue is still routinely made with pulled pork.

6. The speaking fee for Gore is a lot lower here than in Saudi Arabia.

5. The death penalty is still routinely administered by lethal injection, instead of the standard hurling from roof of the courthouse.

4. Americans still giggle when they hear the word "falafel."

3. Pillsbury has not developed a new "Star & Crescent" roll.

2. In a standard deck of cards, "suicide kings" still shown with swords instead of bomb vests.