Announcing the winners of the 32nd ever Right Place Photo Caption Contest!

Presenting the top 15 captions for this picture from AP Photo/Elliott Minor via Yahoo! 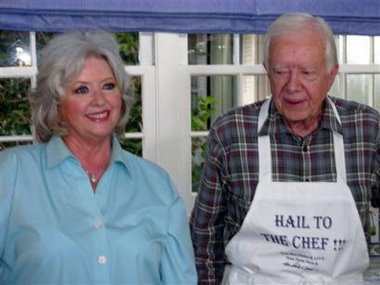 
#10: Jimmy Carter learned the hard way that chicks aren't as in to Nobel Prizes as he was promised.


#8: Jimmy Carter is captured on television "lusting in his heart".


#7: Mr. Carter then blamed President George W. Bush for the excessive use of Worcestershire sauce at the Fairfield County barbecue.


#5: "That's right, Paula, all proceeds from my new cookbook, Dining with Dictators, will go to help Habiteat for Humanity... Er, I mean HabiTAT for Humanity. Heh."


#4: PAULA: "No, you idiots, I said this recipe called for mayonnaise, not malaise!"


#3: PAULA: "Jimmy, I love your apron! It says 'Hail to the Chef', which is very clever, but what does the small print say?"


#2: Jimmy Carter reveals his recipe for failure: "Well, Paula, I just combine a couple of dollops of incompetence, a big heaping tablespoonful of spinelessness, and a half pint of stupidity, then - voila! - the one-term presidency!"

Oh, Thank Heaven for 7/11 Edition
Fickle Finger of Fate Edition
Things Are Looking Up Edition
Rage in the Cage Edition
Not So Mellow Fellow in Yellow Edition
The Beards and the Beads Edition
Weapons of Mash Destruction Edition
You're Al I Ever Wanted Edition
His Cup Runneth Over Edition
The Eyes Have It Edition
Jeepers Veepers Edition
Huggermugger Edition
Ear's to You Edition
Heavy Medal Edition
Village of the Damned Edition
White on Rice Edition
Sunny Side Up Edition
Absentee Mallet Edition
French Tickler Edition
In Through the Out Door Edition
Frankenstein Meets Godzilla Edition
Heaven Must Be Missing an Angel Edition
Spirits of Christmas Present Edition
Dorito Bandito Edition
Shadow of His Former Self Edition
When the Saints Go Mouthing Off Edition
The Face That Sunk 1000 Ships Edition
Surely You Jest Edition
And the Camel They Rode in on Edition
Chucky Squeeze Edition
On Dangerous Ground Edition