I am very sorry that this is so late, but after several unsuccessful attempts at posting it yesterday, I decided to perform some much needed maintenance to my computer and try it again today!

Presenting the top 30 captions for this picture from AP Photo/Martin Meissner via Yahoo! 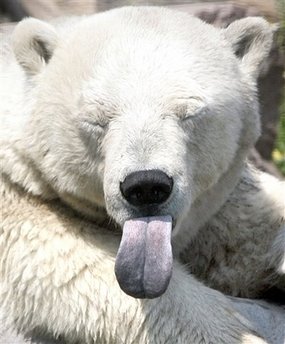 -- "Another ruined passport photo, Moishé! Always with the meshuggeneh faces!"


-- I'm sure tired of kissing the you know what of the French.

-- Mr. Polar Bear expresses his thoughts on a 2008 contest between Hillary Clinton and John McCain.


-- This poor polar bear went to lick its tail nub... and missed.


-- After viewing the Hillary Bust: "There are some things even a polar bear just won't do!"


-- Seems like polar bears have their own message to send Al Gore!


-- "What would you do for a Klondike Bar?"
"Well, I sure as hell wouldn't recommend eating peace activists. Ugh! Too much patchouli aftertaste."


-- Tune in tonight for Animal Planet's An Inconvenient Tongue.

-- Polar bear dreaming of a salt-lick in the shape of a former female Co-President...

-- Under a $12 million park services grant, researchers teach 6 bears how to NOT lick aluminum telephone poles.

-- The very rare "aardbear", native only to photoshop pictures of ANWR.

-- And with one final "slooooop" the bear finished off the last bit of Al Gore.

-- One reviewer of An Inconvienient Truth was not impressed.


#9: Actually, for some, it only takes one lick to get to finish a Tootsie Pop!


#8: "Please take your receipt. Thank you for shopping at Polar Mart."


#7: Not even the Coca-Cola polar bear likes new Coca-Cola Blak.


#5: How many licks does it take to get to the chewy center of an igloo?


#4: Let's see... how many different ways can one imply that Gene Simmons had carnal relations with a polar bear?


#3: Bob's tongue was never quite the same after the kids talked him into licking the North Pole.

Rodney Dill
[Ed. Note: Okay, so it's an inside blogger joke, but it was just too clever to ignore!]

A terrific photoshop from hatless in hattiesburg... 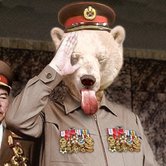