Presenting the top 40 captions for this picture from AFP/File/Miguel Rojo via Yahoo! 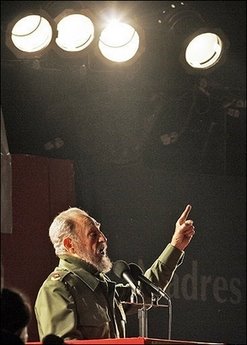 
-- "Communism is the equivalent of everybody in Cuba pulling my finger."


-- Fidel announces that he is transferring power, temporarily, to the shadow puppet on his left.


-- Castro tests the old adage: "You don't need a mortician to know which way the wind blows."


-- "Mira! Mira! The Mothership returns to take me home!"


-- Reuters photoshopped this. Notice, the first light is the same as the third one.


-- Fidel discovers that, in his afterlife, he can speak nonstop for years at a time, and concludes he must be in Heaven. His audience knows better.


-- All of the electricity in Cuba is used to light Fidel during his important speeches.

-- "And now, a word from our sponsor, Venezuelan-owned Citgo."


-- "Move that one! Right now! What have I told you about 'shining light' on my policies?"


-- It wasn't until 30 hours later that the Cuban people realized that Fidel had not moved!

-- "Fidel, you have been judged by God, and your punishment will be to serve as Uday and Qusay's towel-boy in the sulfurous spas of Hell!"

-- "...And I'm going to put the next pitch right in the centerfield bleachers for little Elian, who's in the hospital."

-- Liberal Disneyland tries out their newest animatronic entry to the Hall of Heroes.


-- "I transfer my Presidential powers to my brother. I also transfer my Insane Dictator powers to someone who can put them to good use, Howard Dean."


#5: Fidel Castro astonishes the world by defecting during a San Diego Padres double-header.

D. Carter
[Nice play off the partially obscured message on the wall!]


#4: The Cardassians would never release Castro, so long as he insisted there were four lights.

V the K
[It's a Star Trek: The Next Generation thing. Trust me, it's very clever!]


#3: "Okay, one final question from Helen Thomas, and then I really must die."

Rage in the Cage Edition