This has to be one of our best contests ever! Thank you to one and all who participated!

Presenting the TOP 60 captions for this picture from AP Photo/CBS Face the Nation, Karin Cooper via Yahoo! 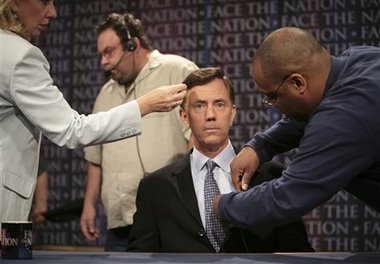 -- "The fact that the new model is more realistic than the original is not what I'd call good news."

-- "Okay, next time we spend the money for better quality plastic."


-- "This is your brain on moonbattery... any questions?"


-- The Lamont-model Kos-bot shorts out at a crucial moment of the campaign.


-- "Remember: Don't insert tab A into slot B, or he might say something rational and confuse everyone." (Warning from the Assembly and Maintenance chapter of DailyKos' Lamont Instruction Manual.)

-- "Somebody call Dr. Noonian Sung! We found the other one!"


-- "Dammit! I know I put the artifical intelligence unit in here somewhere..."


-- All your moonbats are belong to us!


-- He's come a long way from frying up Krabby Patties in Bikini Bottom.

-- And people thought Dan Quayle had that "deer in the headlights" look.


-- Ned Lamont is immortalized for future generations by the same team of scientists who brought you Lenin and Evita Peron.

-- Disney's "Imagineers" put the finishing touches on an animatronic figure in it's latest ride "The Hall of Senators" located in the Fantasyland section of their theme park in Orlando.

-- "Get down here! You gotta see this! I'm telling you, this guy's got a prehensile tail!"


-- Technicians touch up a new wax figure at Madam Tussaud's.


-- "Hey, if you guys had to spend as much time as I do listening to your Kostard supporters spout conspiracy theories, you'd learn to keep a straight face, too."

-- "Next on Face the Nation, Ned Lamont will answer charges that he's a mindless left-wing robot."

-- "He looked at Helen Thomas and turned to stone. Dibs on his wallet!"


-- The installation of the "Moderate Module" hit a few snags.

-- Never mind Snakes on a Plane, the new, scarier movie is Flake Without a Brain!

-- Technicians worked feverishly to save Ned Lamont after his first encounter with Helen Thomas.


-- An heir to the fortune of one of the founders of J.P. Morgan, Ned Lamont was visibly uncomfortable having only two people waiting on him hand and foot.

#20: "Markos Moulitsas has raised the art of political sockpuppetry to unprecedented levels. Ned is more lifelike than the digital Yoda!" -- Gene Shalit


#19: "Boy, that's the last time we go with that mortician! This guy looks terrible!"


#17: "We never should have loaned him to John Edwards for the weekend. Now his positronic network is clogged with hair spray!"


#16: The crash test dummy is prepared for his high-speed collision with the electorate in November.


#13: It only got really scary when they flipped open his head to reveal a hamster running furiously in a wheel.


#6: "Let me just cover up those three sixes on your forehead, Mr. Lamont."


#5: "Ned Lamont, liberal. A man barely alive. Gentlemen, we can rebuild him. We have the technology. We have the capability to build the world's first bionic candidate. Ned Lamont will be that man. Lefter than he was before. Lefter, stronger, faster..."


#4: "Mr. Schieffer, you really need to stop hypnotizing the guests."


#3: "This doomed candidacy has been made possible by the Chubb Group and by Leftists like you."

♫ Come and listen to a story 'bout a man named Ned
Rich profiteer, and it all went to his head
After reading Daily KOS, only thing he could conclude
He'd steal a Senate seat from that Lieberman dude.

Now, most folks know old Ned's a millionaire
He's got a staff of twenty and they all tend to his hair
They say Washington is the place you ought to be
You don't need a platform, just spout out hyperbole ♫

The Beards and the Beads Edition