Presenting the top 35 captions for this picture from AFP/Timothy A. Clary via Yahoo! 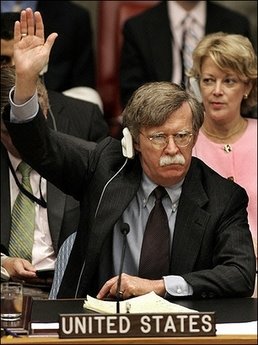 -- "On my honor, I will bitch-slap the next one of you scumbags to bad-mouth the United States of America... so help me!"


-- "Okay, by show of hands: Who thinks these meetings need more cowbell?"


-- Who thinks the UN is a useless sham?


-- John Bolton decided it would be best to just raise his hand and ask where the bathroom was, since, apparently, writing a note to the person next to you is bad press.


-- "Excuse me, my translator is playing showtunes again."


-- "Excuse me! Excuse me! Am I the only one here that isn't a freakin' commie, terrorist, or rabid socialist?"


-- John Bolton's is the lone vote to exile Kofi Annan to St. Helena.


-- BOLTON: "I'd like to make a binding resolution that the U.N. peacekeeping forces stop raping kids and providing cover for terrorists.


-- Then, his earpiece started picking up the signal from Classic Funk 103.3, and John Bolton voted to take Ahmadinejad to Funkytown.

-- Secretly, the American UN delegation referred to Kofi Annan as "Mr. Kot-tair." You can guess who the 'Sweathogs' were.

-- Only after Kofi threatened to put the entire UN into detention until the one who put helium in his asthma inhaler confessed did John Bolton come clean.


-- "I swear to tell the truth, the whole truth, and nothing but the truth... Even if you mo-fo's can't frickin' handle it!"

-- It wasn't the first time Kofi didn't recognize Bolton during a UN debate, but it damn well was going to be the LAST time!

-- The only job lonelier than being a Maytag repair man? Being right at the UN.

-- John Bolton's future career as an NFL referee seemed in doubt when he missed the "Signal a Touchdown" question at his try out.

-- With the crappy reception at the UN, this was the only way Bolton could pick up the Rush Limbaugh Show on his walkman.


"Everyone who wants to slap France around a bit, raise their hands."


#8: "I don't have a question... I'm just trying to hold this dopey RadioShack earphone in place."


#7: "This is the hand I used to bitch-slap George Voinovich and make him cry like a baby."


#4: "Does anyone OTHER than Mr. Bolton know the correct answer?"


#3: "May I be excused? I have an anger management class in ten minutes."

Who's Bush's UN pick
That's a sex machine to all the chicks?
(Stache!)
You're damn right

Who is the dude
That would let the Israelis go to Beriut
(Stache!)
Can ya dig it?

Who's got the whiskers that won't cop out
When there's danger all about
(Stache!)
Right on

(NOTE: The above contest is already shaping up as one of the best ever!)

Not So Mellow Fellow in Yellow Edition