As expected, an especially good one! Sorry this wasn't up yesterday, but I was too tired last night to give it the attention it deserved so that it could be judged in a fair and efficient manner.

Presenting the top 30 captions for this picture from Igor Khodzinskiy via Sun-Sentinel.com. 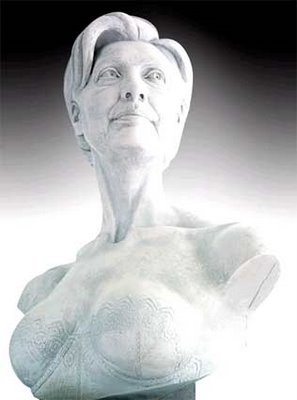 -- Susan MacDougal's hard work and stoic silence paid off with one of the finest abstract soap sculpures a federal prisoner had ever produced.


-- More proof that there is not a fetish out there that can't be found on the internet.

-- Because of the insufficient amount of stone to complete Senator Clinton’s calves and thighs, the artist stuck to portraying her less noticeable qualities.

-- Following the Democrat mantra of gun control, Hillary has set an example by disarming herself first.


-- The maquette for the fifth face on Mt. Rushmore was unveiled, reviled... and re-veiled!


-- Hillary Clinton to star in an updated version of the film A Farewell to Arms.


-- An artist captured in stone an image of the only breasts that were not fondled in the Clinton White House.


-- When Giuliani was Mayor, this trash was kept out of NYC museums!


-- Hillary sues the Museum of Sex for making her bust look too feminine.

-- After years of trying to get Bill to put her there, Hillary is finally put on a pedestal.

-- And then our hero, Perseus, whilst viewing his quarry with his brazen shield, did hold up a looking glass, whereby the monster beheld her own gaze...


-- Next on Nightline: A surgically-enhanced Hillary Clinton looks toward a run for the Presidency with newfound confidence.


-- Animal rights activists in the northeast have been replacing salt licks with hideous statues like this one to scare the deer away from hunting areas.

-- H.R. Giger's original concept for the Alien Queen was too frightening for mainstream movie-goers.

-- This hideous figurehead adorned the prow of Lord Nelson's flagship, and is believed to be responsible for frightening the French Fleet into scuttling their own ships at the Battle of Trafalgar.

#10: Thus was the Dark Queen defeated, as Raistlin cast a spell which turned even the depths of Hell to impregnable stone...


#9: What Natalie Maines keeps on her piano.


#7: The Hall of Shame announces it's first inductee.


#6: The artist said he had no trouble getting former President Carter to pose in his mansiere.

♫ And with a look she'll seize you
She'll unease you
All the better just to freeze you
She's precocious, and she says just
What it takes to make a pro blush
All the boys think she's heavyweight
She's got Jimmy Carter's face ♫


#3: Even Hillary was not immune to the stare of Helen Thomas.


#2: So the Lord struck down those cities and the entire plain, including all those living in the cities — and also the vegetation in the land. But Lot's wife looked back, and she became a pillar of salt... with Jimmy Carter's face and honkers. --- Genesis 19:25-26

(To the tune of "Killer Queen")

To avoid complications
Bill never met a woman he didn't like
In conversation she spoke like an aging dyke
Met a man from Arkansas broke a major real-estate law
Then again incidentally if she's that way inclined (can you say Whitewater?)
Support came naturally from Paris (naturally)
For the Senate she couldn't care less
Deceptive yet precise

Things Are Looking Up Edition