Presenting the top 30 captions for this picture from AP Photo/Ron Heflin via Yahoo! 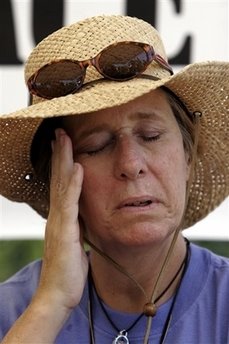 
-- For one brief moment, Cindy Sheehan considers the possibility that she's nothing but a ridiculous, posturing ass.


-- "Cindy, stay awake! These are your own speeches you are listening to!"


-- Cindy found the hollow whistling sound she heard every time the wind picked up quite annoying.

-- "Casey's insurance money is almost gone. What can I do to make more without working? Think, Cindy, think!"

-- As Cindy Sheehan acted out the diner scene from When Harry Met Sally, her audience lost, in order, their drinks, their lunches, and their minds.

-- "God, I miss Hugo. Those lips, those eyes, those dictitorial tendencies!"


-- "I'm feeling faint from my hunger strike! Quick, somebody get me some ice cream and Jamba Juice! And how about a couple Big Macs while you're at it?"


-- "Geez, I feel like I've been out of it for two years! What did Jesse Jackson slip into my drink?"

#10: "Maybe they're right. Maybe my son died in a noble cause to bring freedom to a long suffering people. Maybe in my grief, I have gone too far, associating with people I would normally never be seen with and letting them use me for their own leftist, Anti-Semitic agenda. Maybe George Bush is just a good man doing his best in extremely difficult times and not the Antichrist. Maybe............ NAHHH!!!!!!"


#7: "I've got a headache THIS BIG and it's screaming for Sharpton!"


#3: "I'm not feeling so good, anyone have a headstoneless grave I can lie down on?"


#2: Cindy Sheehan's hat, embarrassed to be seen with her in public, would sometimes try to disguise itself.

Who’s peakin’ out from under a pup tent
Callin’ on Bush to be impeached?
Who’s disgracin’ her fine son’s memory?
Everyone knows it’s Cindy.

Who’s trippin’ down to protest at Crawford
Smilin’ at everybody she sees?
Who’s reachin’ out to friends like Hugo?
Everyone knows it’s Cindy.

Who’s jettin’ down to see Hugo Chavez
Smilin’ at all the media cheese?
Who’s as full o’ crap as a Christmas turkey?
Everyone knows it’s Cindy.

Good enough for partial credit, Beerme, but a better version has ALREADY BEEN DONE!

Hooray! Chris is back, with a vengeance... 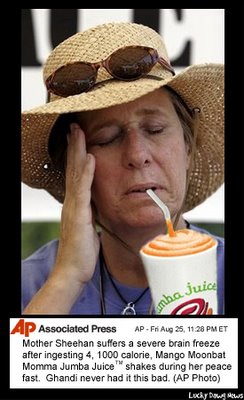 The outlook wasn’t brilliant for the moonbat kind that day:
The Bush admin was still intact with one election left in play.
So when Clooney’s act died at first, and Barbara’s did the same,
A Sickly silence fell upon the patrons of the blame game.

A straggling few got up to go in deep despair. The rest
Clung to the hope which springs eternal in the liberal breast;
They thought if only Casey’s Mom could get the message out
We’d even put Soros' money up for Mother Moonbat's words to tout.

But Cheney argued cogently and there was always little Karl Rove
And the former made them crazy and the later conspiracies wove.
So upon the stricken moonbatitude a grim melancholy sat
For there seemed but little chance of Casey’s Mom changing any of that.

But Cheney shot a doctor, and the MSM overhyped it with a fury
And Rove, the much dispised, was gonna get indicted by the Grand Jury.
But when the dust had settled, the liberals saw what had occurred.
Cheney was still in office and Libby, not Rove, had a subpoena served.

So from moonbat throats there rose a lusty yell;
It tumbled through the networks, it rattled in the dell;
It knocked upon the internet and recoiled through the pines
For Casey’s Mom, the Mighty Moonbat, would advance the liberal line.

There was ease in Sheehan’s manner as she stepped into her place;
There was pride in Sheehan’s bearing, and a frown on Sheehan’s face.
And when, responding to their fears, she put on a tin foil hat
No stranger in the crowd could doubt she was the Mother of all Moonbats.

Thousands of eyes were on her as she dished her liberal dirt,
Thousands of tongues applauded as she played upon her hurt.
And while the sane among us questioned her liberal script,
Defiance flashed in Cindy’s eyes and a sneer curled Cindy’s lip.

And now the counter arguments came hurtling through the air
And Cindy stood a-watching them in haughty grandeur there.
Close by the raving spokesman, the truth unheeded sped-
“That can’t be true” said Casey’s Mom, “Strike one” the Neo-cons said.

From the streets, filled with hippies, there went up a muffled roar
Like the beating of the storm waves on a stern and distant shore.
“Kill them! Kill the Republicans!” shouted all the peaceniks in the stands
and it’s likely they’d have rioted had not Cindy raised her hand.

With a smile of false sincerity great Cindy’s visage shone
She stilled the rising tumult with a promise she would fast on;
She signaled to her critics, and once more the factoids flew,
But still Cindy ignored the truth, and the ‘Right’ said “Strike Two!”

“Fraud!” cried the maddened masses, and echo answered fraud;
but one scornful look from Cindy and the liberals were awed.
They saw her face frow stern and cold, saw her brain muscles strain,
And they knew that Cindy wouldn’t let another fact go by again.

The sneer is gone from Cindy’s lip, her teeth are clenched in hate;
She pounds with cruel violence her verbiage upon the State.
And now the ‘Right’ hold the truth, and now they let it go,
And now the air is shattered by the force of Sheehan’s blow.

Oh somewhere in a liberal land the sun is shining bright,
The Dixie Chicks play somewhere, somewhere hearts are light.
And somewhere terrorists are laughing and somewhere Al-Qaeda shouts,
But there is no joy in Moonbatville, Mother Moonbat has struck out.