Sorry this is late, but my (hopefully temporarily) screwed up schedule has struck again! For those looking for a CAPHOG update, I'm dividing it into quarters this time around, meaning look for the first one following contest #13 in a few weeks! Oh, the suspense..."

Presenting the top 40 captions for this picture from AFP/File/Behrouz Mehri via Yahoo! 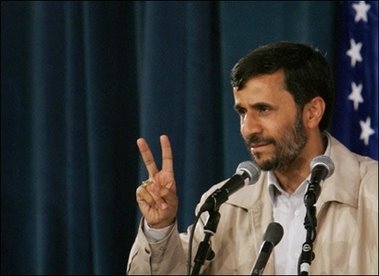 -- "This is how many Jews actually died in the 'holocaust'!"

-- "And then, if the infidels do not convert, you take two eighteen-inch surgical steel needles and..."


-- "No, Mahmoud, no one thinks you're impression of Winston Churchill is any good."


-- "There are two things wrong with your statement. First, I love my donkey. Second, she understands that I am a busy man and can't give her all the time she wants."


-- ♫ So BUUUUUUUY, buy this Iranian Pie
Drove the warhead off to Zion so that Zion would fry.
Those in-fi-dels can drink their whiskey and rye
and sing "This will be the day that I die." ♫

-- Mahmoud teaches the newest terrorist nursery rhyme: "One, two, blow up your shoe..."


-- Mahmoud Ahmadinejad attends Woodstock 2006, where he enjoys music, Patchouli, Birkenstocks, the odd toke of Mary-Jane, and meeting influential Americans, such as Jane Fonda and John Kerry.

-- "And when I wear my special Korean shoes, I am 2 inches taller."


-- In the ensuing silence, President Ahmadinejad wondered why the members of the Star Trek convention did not respond positively to his wishes that they "live long and prosper."

-- "No, no! It is Mohammed and Allah, there is not Mohammed Ali in Islam."

-- "I bid two camels for Condi. Mahmoud like Condi!"


-- "...And then, Little Rabbit Foo-Foo was shot for being a Zionist Collaborator. Allahu Akhbar!"

-- After mastering the science of nuclear weapons, they go for the next step... shadow puppets.

-- For the second and last time, I am NOT Henry Winkler!

-- "Two bullets for every Joooo! That's our promise here at Crazy Mahmoud's."

-- "I give the filthy joo who took my tie two minutes to give it back."

-- Mahmoud answers the age old question: "One hump or two?"


#9: "As you can see, just the threat of a Three Stooges eye-poke is enough to reduce the French Ambassador to the posture of a submissive, sobbing dhimmi."


#7: "I will not train a future martyr to become a suicide bomber until he's at least this old."


#6: "Far out! Now, I want everyone to stay away from the brown acid. A lot of people are getting sick from it. Unless you're an infidel, don't take the brown acid, okay?"


#5: "On my honor, I pledge to kill Jews first, Christians second, Sunnis third, atheists fourth, to annex Iraq, to turn Europe into Eurabia, and to obey the laws of the pack."


#4: "That's right! Using the excess hair stores on my bum, I was able to have a fuller, more lush head of hair in just two weeks!"


#3: "And the second name I hate is 'I'm-a-Dinner-Jacket', because: Hello! Does this look like a dinner jacket?"

ONGOING:
Captions Outrageous! [Are You There God? It's Me, Hugo Edition]

The Eyes Have It Edition