Presenting the top 25+ captions for this picture from Keith Bedford/Reuters via Yahoo! 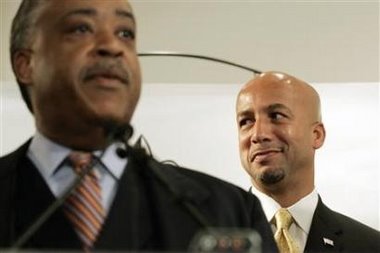 -- Democrats today unveiled the scale model for their proposed new national monument: "Mount No-More-Rush". Complete with monorail transportation system, it is to be constructed the moment they take control of Congress at a total cost to tax payers of $20 trillon, and was designed to help get minority voters to the polls. (Not pictured: Jesse Jackson, Maxine Waters.)


-- "After our success with the Ned Lamont robot, our scientists are using affirmative action to broaden our product line."


-- Al Sharpton, King of Race Baiting, introduces his Crown Prince to the world.

-- NAGIN: "Gonna git me some of that tasty earwax!"

-- The Smithsonian unveils it's new model of Uranus and it's circling moon.

-- In an effort to make sense, Sharpton and Nagin try to run their brains in tandem.


#7: Al Sharpton was beginning to think those flood waters were toxic after all.


#6: SHARPTON: "Listen to me! I'm not crazy! It's not a con this time! Aliens are injecting larvae into our brains and taking over our bod... snick... I mean, all hail our insect overlords, bringers of peace and justice!"


#5: And then, the brainbug extended its proboscis and attempted to suck out Nagin's brain. It soon starved to death.


#3: "We are merely exchanging long protein strings. If you can think of a simpler way, I'd like to hear it."


#2: New from K-tel: Be the first in you neighborhood to own the Black Leader Mobile!


#1: With the help of Senator Ted Stevens, Sharpton and Sugar Ray con $300 Million in Katrina Aid to construct another "Bridge to Nowhere."

You're Al I Ever Wanted Edition