Sorry for the lack of fresh content of late, but I've been doing more reading than writing this past week. So, to tide you over until the next inspiration strikes, I want to share with you some of the very best stuff I have found out there in this thing we call the blogosphere recently, divided (more or less) by subject.

UPDATE - MAJOR STORY BREWING: Apparently, the Red Cross was all set to help those poor folks stranded at the Superdome - immediately after the storm - but they were ordered to stay out of New Orleans - by Louisiana state officials! Unreal!

Bill Whittle (aka Proteus) is, bar none, THE best essayist in the blogosphere! People wait for each and every nugget from his Eject! Eject! Eject! site with baited breath, and he rarely disappoints. This week's must read, Tribes, hits the nail right on the head, as usual!

Next, we have the curious case of Sen. Mary "Sugar Ray" Landrieu, who said this regarding criticism of Louisiana officials' response to Hurricane Katrina:

"If one person criticizes them or says one more thing, including the president of the United States, he will hear from me," she said on the ABC's This Week. "One more word about it after this show airs and I might likely have to punch him. Literally."

But Ace of Spades has an excerpt from Sen. Landrieu's own website, which points the finger at her precious state and local officials: Quick, Before She Deletes It: Senator Landrieu's Own Website Puts Onus on Local Authorities for Immediate Response . So, Senator, are you going to punch yourself? 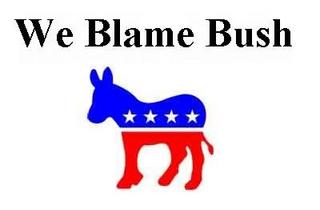 (Thanks for the image, Pat Curley!)

Are those of you on the left SURE you wanna play this blame game thing? Better read New Orleans CYA Campaign Takes "Gotcha" to a New Low at Hog on Ice first. Then read Ace of Spades When the Levee Board Story Breaks.... You might just change your mind. Provided you actually HAVE one!

Still not convinced the blame game is not a good idea for the left to play? Ahem! For those of you claiming Bush didn't do enough to take control of the situation in New Orleans sooner, ever hear of the Posse Comitatus Act? PoliPundit reader Oak Leaf, an Army Reservist, will be happy to enlighten you through the good graces of Lorie Byrd via Civil Defense Or Lawfare? At the risk of being socked in the nose by Sen. Landrieu, Lorie also provides us with this: Blanco's 24 Hour Delay.

Of course, you might just keep on plugging away with the "it's all Bush's fault" meme. After all, it seems to be working so well for you, now doesn't it?

Predictably, in response to the tragedy, the right half of the blogosphere rolled up its sleeves, while the left half was too busy wagging its fingers at Bush. (Sigh.) See Right Wing Nut House and The Politburo Diktat for the sad details.

John Hawkins at Right Wing News has more leftist compassion on full display with Drown And Die, You Arrogant Hillbilly Southern-Fried Leeches! It's so nice to know how much they really care, isn't it?

AMERICAN HOSTAGE FREED IN IRAQ
Dr. Rusty Shackleford at The Jawa Report has been personally involved in keeping the plight of American hostage Roy Hallums, who disappeared Nov. 1, 2004 in Iraq, from being forgotten. Today, Roy Hallums has finally been freed! Understandably, Dr. Rusty is overjoyed. A very moving read.

Don't think the left has gone off the edge yet? John Hawkins at Right Wing News has a DU thread you really ought to see, The DU Thread Of The Day: I Shall P*ss On The Grave Of William Rehnquist. Absolutely beyond words...

There is no better way to illustrate the mental illness and utter depravity of those on the left fringe, then to let them speak for themselves. Will Franklin of WILLisms presents: Cindy Sheehan, on America. It is a must have catalogue of Sheehan's most kooky quotes - bookmark and share!

John Ruberry at Marathon Pundit was concerned that this story was getting lost, so I'll do what I can to put the word out. For those of us in the Chicago area, the words "Rep. Jan Schakowsky" are enough to make our skin crawl and our stomachs queasy. For John, it must be unbearable because, well, that particular howling moonbat is his Congresscritter! Yikes! Anyway, it seems her hubby has had some problems with the law, and John has the poop: Congresswoman Schakowsky's Husband Pleads Guilty to Fraud.

Buckley F. Williams at The Nose on Your Face presents evidence that the roots of the BFEE (Bush Family Evil Empire) go back much farther than anyone on the left had dared to dream with Bush Family Disasters Throughout History.

Of course, Liberal Larry of BlameBush! is all too happy to chronicle the latest Bush outrage with Bush Drinks Blood from Hurricane Victim's Skull.

Right Wing Duck has some Lessons from Katrina for us all at IMAO.

The Therapist has a toe-tappin' re-write of an old Johnny Horton classic: The Looting of New Orleans.

If you're still in the mood to sing after that, why not check out this Open Letter to Jane and Al from the Fat Farm not by Michael Moore at Huffington's Toast? "Hello, Franken. Hello, Fonda..."

Poor Mother Sheehan: Flood Coverage Takes Devastating Toll on Sheehan Campaign. Sharp as a Marble has the details. Gee, maybe she ought to sue somebody!

I sure hope some clever conservative came up with this website as a joke, otherwise... well, see for yourself: George W Bush is the AntiChrist. [h/t Ace of Spades.]

Steve H. at Hog on Ice is convinced, Bush Is Satan!

UPDATE 9/8: Rob B. at File It Under... has some great ideas for bumber stickers for left-wing kooks: Beware of the (Moon)Bat Mobile.

Carnival of Crazy V - A Whirlwind of Crazy at File It Under...

Carnival of Classiness at WILLisms.

The 155th Carnival of the Vanities at sortapundit.

NOTE: Due to technical problems, Rick Moran's Carnival of the Clueless at Right Wing Nut House, has been cancelled for this week.

UPDATE 9/8: The Carnival of Comedy is now being served at Rapid Politics Dot Com.

The weekly photo caption contest is up at WILLisms.

Rodney Dill is always running a caption contest at Outside the Beltway.

Don't forget our homegrown caption contest here at The Right Place: You're Al I Ever Wanted Edition.

Pat Curley wants some muscular he-man slogans for the Democrats at Brainster's Blog.

There's still time to win an i-Pod Shuffle via Where Have You Gone, Ronald Reagan? and the Outrage a Liberal headline submission contest.

That should be enough for now. Y'all come back now, ya hear?