Not So Wild About Harry 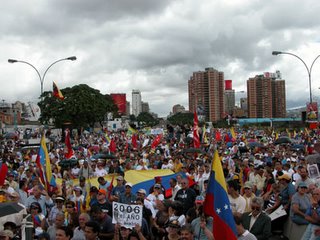 If there was something different this time around is that the crowd showed a lot of anger, which I had not seen before in any of the opposition marches. The presence of cops, intelligence police helicopters and the simple mention of Chavez' name simply released a lot of anger from the people there. You could also see it on the posters, lost of swear words in them, something you did not see as much before. People are p....., you better believe it and they are very vocal about it. The best part was: no buses like those Chavez needs to bring to his marches and everyone was there out of their own will, this is a powerful base for December 2006.

There were a few speakers, young and old, old and new, some good like Alexandra Ruiz Pineda, others representing the old school of speeches that seem to scream at you, I could have done without Eduardo Fernandez and Ramos Allup, but nobody asked me anyway. This is a fisrt good step at mobilizing people in 2006, the crowd, the voters and the people are there, all they need is leadership. It felt good to march and end the day very tired again, with a feeling of accomplishment. Took lots of pictures.

While Harry Belafonte and the radical left in America declare solidarity with Hugo Chavez, a growing number of Venezuelan citizens are doing the exact opposite. Now, if we can bar Jimmy Carter as an observer this time, democracy in Venezuela will have a shot.