Announcing the winners of the 27th ever Right Place Photo Caption Contest!

Wow! Once again, the responses were overwhelming! There were too many good ones to reward them all, so make sure you check out the comments section of the original contest (linked above)!

Presenting the top twenty captions for this picture from AP Photo/Gerald Herbert via Yahoo! 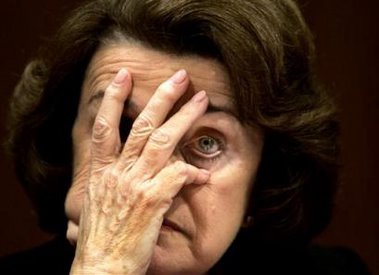 
#18: Senator Feinstein's claim that she had not, once again, put her foot in her mouth was seriously undermined by the outline of a bunion appearing on her right cheek.


#16: Slowly, the hand reached up from under the table... and dragged its victim down to her doom!


#15: Whatever you do, don't look directly into the Ark of the Covenant!


#14: A look of helplessness as the alien Moonbat creature attaches itself to the face of Sentator Diane Feinstein, creating yet another talking point spouting Dem-Pod Person.


#13: At that point, the blind man attempting to "see" Ms. Feinstein went into seizures.


#12: Dianne Feinstein prepares for life after the Senate, as she tries out for the role of The Cryptkeeper in a revival of Creepshow.


#10: Dianne finally comes to grips with the hand of fate.


#9: "What's happening? Oh, my God! Someone must've destroyed the magical portrait which kept me from aging!"


#7: "You will curse the day you did not do, all that the Phantom asked of you!"


#6: Darkman's mask begins to lose molecular cohesion at a most inappropriate time.


#5: Set 500 years after her landing back on Earth, a 531 year old Sigourney Weaver returns in the latest of the "Aliens" series.

John Ruberry [aka Marathon Pundit]
It just worked on so many levels!

Oh, Thank Heaven for 7/11 Edition
Fickle Finger of Fate Edition
Things Are Looking Up Edition
Rage in the Cage Edition
Not So Mellow Fellow in Yellow Edition
The Beards and the Beads Edition
Weapons of Mash Destruction Edition
You're Al I Ever Wanted Edition
His Cup Runneth Over Edition
The Eyes Have It Edition
Jeepers Veepers Edition
Huggermugger Edition
Ear's to You Edition
Heavy Medal Edition
Village of the Damned Edition
White on Rice Edition
Sunny Side Up Edition
Absentee Mallet Edition
French Tickler Edition
In Through the Out Door Edition
Frankenstein Meets Godzilla Edition
Heaven Must Be Missing an Angel Edition
Spirits of Christmas Present Edition
Dorito Bandito Edition
Shadow of His Former Self Edition
When the Saints Go Mouthing Off Edition