Announcing the winners of the 26th ever Right Place Photo Caption Contest!

In honor of Friday the 13th... Presenting the top thirteen captions for this picture from AFP/Getty Images/Chip Somodevilla via "Yahoo!" 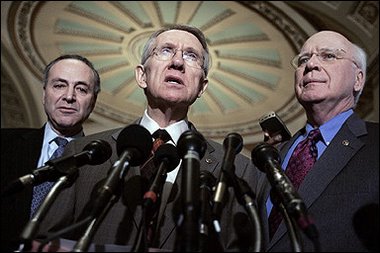 #13: DRUDGE BREAKING: In a rare admission of fault today, President Bush declared that when he stated, "Harry Reid should be cannonized," he'd thought it had something to do with the business end of a Howitzer.


#11: At the news conference, Harry Reid worked himself into such a hot rage that his head sprouted leaves in the dead of winter.


#10: Schumer and Leahy watch helplessly as Harry Reid's brain is sucked out.


#9: Democratic Senators Reid, Leahy and Schumer deny that they took any illicit funds in the latest lobbying scandal as they hold a press conference in the J.A. Abramoff Room of DNC headquarters.


#8: Reid's bore-waves only turn the living into cowardly zombies if they touch you. Luckily, they only extend a few feet.


#7: "The MSM tell me that from that camera angle, it doesn't look like a tin foil hat at all!"


#6: "...Therefore, in order to portray the proper image of Democrats, we've ordered a large number of these caps..."


#5: During a pre-news conference game of charades, reporters quickly guessed that the three politicians were doing, from left to right, Dracula, a palm tree and a sparrow mesmerized by a cobra.


#4: Senators Reid, Schumer and Leahy finally admit to what most have suspected: Home for them is their flying saucer, parked in an Area 51 hangar.


#2: Is the main energy weapon about to fire? Oh, man, I am going to love the sequel to Independence Day!


#1: "And if our demands are not met immediately, I will unleash the awesome powers of my Oversized Wheel Helmet of Doom!"

Oh, Thank Heaven for 7/11 Edition
Fickle Finger of Fate Edition
Things Are Looking Up Edition
Rage in the Cage Edition
Not So Mellow Fellow in Yellow Edition
The Beards and the Beads Edition
Weapons of Mash Destruction Edition
You're Al I Ever Wanted Edition
His Cup Runneth Over Edition
The Eyes Have It Edition
Jeepers Veepers Edition
Huggermugger Edition
Ear's to You Edition
Heavy Medal Edition
Village of the Damned Edition
White on Rice Edition
Sunny Side Up Edition
Absentee Mallet Edition
French Tickler Edition
In Through the Out Door Edition
Frankenstein Meets Godzilla Edition
Heaven Must Be Missing an Angel Edition
Spirits of Christmas Present Edition
Dorito Bandito Edition
Shadow of His Former Self Edition