Announcing the winners of the 33rd ever Right Place Photo Caption Contest!

Presenting the top 20+ captions for this picture from AP Photo/Rob Carr via Yahoo! 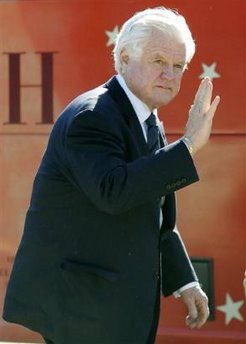 The "Gee, I could've won this contest if I had only thought of something along the lines of the first caption that popped into Mr. Right's mind when he chose this picture" award:

Once the colossal black hole of ignorance that was Ted Kennedy began sucking in neighboring galaxies, the Universe was doomed to an untimely end!


#19: Ted Kennedy's stoop appears more prevelant these days. (Not to be confused with the drunken "stupers" normally associated with Teddy...)


#16: Teddy gives the signal for his favorite size beverage... a fifth.


#12: The bloviating killer then drunkenly hurled a throwing-star at the "Remember Chappaquiddick" heckler, embedding it into his neck.


#11: In his latest frat prank for the OWL CLUB, Senator Kennedy plays a rousing game of "Ninja Frisbee" with Justice Sam Alito.


#10: Senator Kennedy pauses to form a crescent and star symbol of Islam.


#9: "Live long and prosper? Ha! Between state-run health care and the taxes to pay for it, good freakin' luck with that!"


#8: Senator Kennedy sees stars as he wanders out of the Congressional drunk tank.


#6: "Damned DT's! Outa the way, dammit! I can't see that cocktail waitress who's waving her pantyhose at me."


#5: Witness later recalling: "Well... he caught one, and the one to the back of the head did no damage, but the lower one took out his brain."


#2: Ted Kennedy demonstrates the proper way to signal for a right turn off of a bridge.


#1: "What? The campaign bus is out of ethanol? No problem, I'll just go breathe into the tank for a few minutes."

Oh, Thank Heaven for 7/11 Edition
Fickle Finger of Fate Edition
Things Are Looking Up Edition
Rage in the Cage Edition
Not So Mellow Fellow in Yellow Edition
The Beards and the Beads Edition
Weapons of Mash Destruction Edition
You're Al I Ever Wanted Edition
His Cup Runneth Over Edition
The Eyes Have It Edition
Jeepers Veepers Edition
Huggermugger Edition
Ear's to You Edition
Heavy Medal Edition
Village of the Damned Edition
White on Rice Edition
Sunny Side Up Edition
Absentee Mallet Edition
French Tickler Edition
In Through the Out Door Edition
Frankenstein Meets Godzilla Edition
Heaven Must Be Missing an Angel Edition
Spirits of Christmas Present Edition
Dorito Bandito Edition
Shadow of His Former Self Edition
When the Saints Go Mouthing Off Edition
The Face That Sunk 1000 Ships Edition
Surely You Jest Edition
And the Camel They Rode in on Edition
Chucky Squeeze Edition
On Dangerous Ground Edition
Here's Cooking at You Edition