Announcing the winners of the 34th ever Right Place Photo Caption Contest!

Presenting the top 25+ captions for this picture from Stringer/Reuters via Yahoo! 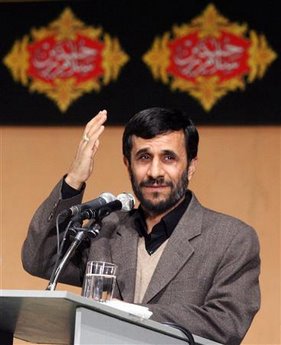 
"Whatever the holocost, it was worth it."


"If Ayatollah once, Ayatollah a thousand times!!!"


When "What is something that never actually happened?" was deemed the wrong question to the answer "The Holocaust," Ahmadinejad realized he shouldn't have wagered everything on Final Jeopardy.


We now return you to our regularly scheduled countdown...


#24: Jacket from Armani, sweater from Gucci, shirt from Versace, ring from Cartier.


#21: "We will now accept opening bids for not being a target of our righteous jihad. Wait for it, France..."


#19: "Why, yes, I am indeed doing a Mussolini impersonation. Since you guessed correctly, your family will be spared!"


#17: Osama bin Ladin, for many years the face of Islamofascism, is now getting competition from the other end.


#16: Addressing David Gregory at an Iranian press conference: "For that impertinent question, you will be beheaded."


#13: "Yes, of course I was disappointed at being rejected for the role of Gilligan in the remake, but I've been able to channel my ambition into other successful endeavors. I'm going to star in The George Clooney Story."


#12: "Beautiful, Mahmoud! You have that look of concern down pat while you make the 'OFF WITH HER HEAD' hand motion."


#11: Even when he began refusing to speak except through his invisible hand puppet, the UN still denied they were dealing with a nutjob.


#10: Mahmoud Ahmadinejad demonstrates the newest Iranian technology by splitting a "peaceful" atom into a glass of heavy water.


#9: "I'm happy to be the keynote speaker at the Iranian Women's Conference this year, and I'm sure there are probably a lot of familiar faces out there; of course, since you're all wearing burkhas, it's hard to tell."


#6: In spite of unfettered access to the world's finest medical, political and psychiatric care, the "Iranianization" of the Queen Mum appeared complete.


#5: "I'm not just a member of the Hair Club for Jihadis, I nationalized the company!"


#2: "This glass of water is neither half empty, nor half full. It has been half-martyred for the glory of Allah!"

Technically speaking, it's not really a caption, but it is very creative and downright funny, so I am treating it like a photoshop entry! 5 bonus points awarded for the following witty ditty...

(Sung to the tune of Timbuk 3's The Future's So Bright, I Gotta Wear Shades)

We've got oil waiting for world distribution
Fifty bil ($) a year -- buys a lot of of fear
Attacks are going great
Targeting is getting better.

Well Allah be blessed and world be wise
Need a Kim Jong-Il techie and x-ray guys
Attacks on Israel are great
But Tel Aviv is better.

Rodney Dill, who has evidently been working on different versions of this one for awhile now...

Speaking of photoshops, Chris is back in the game this week with another gem... 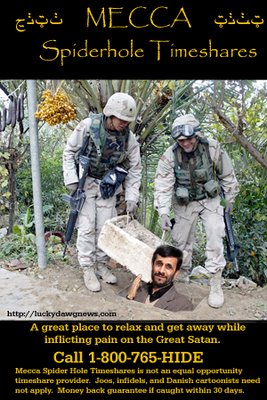 *[DISCLAIMER: THIS IS, QUITE OBVIOUSLY, A JOKE! PLEASE DO NOT CALL THE ABOVE TELEPHONE NUMBER! THANK YOU!]

Oh, Thank Heaven for 7/11 Edition
Fickle Finger of Fate Edition
Things Are Looking Up Edition
Rage in the Cage Edition
Not So Mellow Fellow in Yellow Edition
The Beards and the Beads Edition
Weapons of Mash Destruction Edition
You're Al I Ever Wanted Edition
His Cup Runneth Over Edition
The Eyes Have It Edition
Jeepers Veepers Edition
Huggermugger Edition
Ear's to You Edition
Heavy Medal Edition
Village of the Damned Edition
White on Rice Edition
Sunny Side Up Edition
Absentee Mallet Edition
French Tickler Edition
In Through the Out Door Edition
Frankenstein Meets Godzilla Edition
Heaven Must Be Missing an Angel Edition
Spirits of Christmas Present Edition
Dorito Bandito Edition
Shadow of His Former Self Edition
When the Saints Go Mouthing Off Edition
The Face That Sunk 1000 Ships Edition
Surely You Jest Edition
And the Camel They Rode in on Edition
Chucky Squeeze Edition
On Dangerous Ground Edition
Here's Cooking at You Edition
Catch a Falling Star Edition