Announcing the winners of the 36th ever Right Place Photo Caption Contest!

Thank you to one and all who participated, and thank you for your patience this week!

Presenting the top 25 captions for this picture, stolen from Buckley F. Williams at The Nose on Your Face 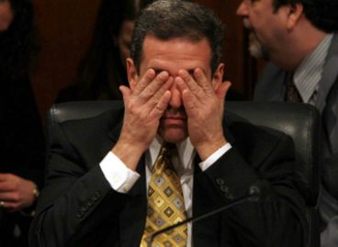 BONUS! Revenge of the Sith Award:

Famed blogger 'Mr. Right' hides his face and cowers after receiving the news that Buckley F. Williams and some of his associates are waiting outside to discuss a certain 'stolen picture incident' with him.


#24: Senator Feingold unsuccessfully tries out for the part of "See No Good" in George Clooney's forthcoming movie See No Good, Hear No Good, Speak No Good.


#20: "We don't need troops in Iraq to fight terrorists! When the terrorists come around, we just magically disappear --- like this!"

Senator Feingold is playing "Peekaboo, I Censure You" all by himself again.


#17: Cindy Sheehan's first adult film was rough on even her most die-hard supporters.


#16: "This is the only way I can keep my face up after having my brain removed."


#15: Falling for one of the oldest tricks in the book, Sen. Feingold counts to 50 while Senator Hillary Clinton "hides" his censure resolution in a chamber paper shredder.

Watching Feingold when somebody tells him he's being referred to as the "Jackass from Wisconsin": PRICELESS!

Much to his horror, Russ soon discovered that he forgot his ruby slippers at home and had to find another quick way out of the Senate.


#10: Senator Feingold was the only one who knew what to do when the Senate was invaded by the Ravenous Bugblatter Beasts of Traal.


#9: "They say if you ever come face to face with a Gorgon, you should avoid eye contact -- oh, hello, Mrs. Clinton."


#6: At the end of a long day, Senator Feingold removes the grease paint.


#4: Following a five-year-old's advice, Sen. Feingold covers his eyes in a bid to make all of the bad Republicans just go away.


#1: Senator Feingold accepts the challenge to find his butt with both hands.

We now rejoin our latest contest, already in progress:

Oh, Thank Heaven for 7/11 Edition
Fickle Finger of Fate Edition
Things Are Looking Up Edition
Rage in the Cage Edition
Not So Mellow Fellow in Yellow Edition
The Beards and the Beads Edition
Weapons of Mash Destruction Edition
You're Al I Ever Wanted Edition
His Cup Runneth Over Edition
The Eyes Have It Edition
Jeepers Veepers Edition
Huggermugger Edition
Ear's to You Edition
Heavy Medal Edition
Village of the Damned Edition
White on Rice Edition
Sunny Side Up Edition
Absentee Mallet Edition
French Tickler Edition
In Through the Out Door Edition
Frankenstein Meets Godzilla Edition
Heaven Must Be Missing an Angel Edition
Spirits of Christmas Present Edition
Dorito Bandito Edition
Shadow of His Former Self Edition
When the Saints Go Mouthing Off Edition
The Face That Sunk 1000 Ships Edition
Surely You Jest Edition
And the Camel They Rode in on Edition
Chucky Squeeze Edition
On Dangerous Ground Edition
Here's Cooking at You Edition
Catch a Falling Star Edition
Iran So Far Away Edition
Weapons of MASS. Obstruction Edition