Presenting the top 20 captions for this picture from AP Photo/J. Scott Applewhite via Yahoo! 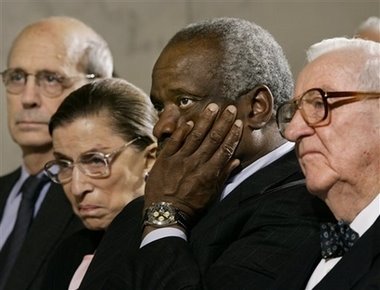 -- GINSBURG: "Is that a Coke can in your pocket, Thomas, or are you just happy to see me?"


-- Well, there goes the liberal neighborhood!


-- GINSBURG: "Sheesh! Without O'Connor, it's a real sausage-fest here."


-- After almost falling asleep listening to Cindy Sheehan's "Bush Killed My Son" story for the 26th time, Judge Thomas had to resort to smacking himself to stay awake.


-- Sitting through yet another Florida timeshare presentation, the justices mark time until they can ride Pirates of the Carribbean at Disney World.


-- THOMAS (thinking): "Looks like I picked the wrong week to give up sniffing glue."


-- No one on the court enjoyed being equated with Diana Ross.


-- THOMAS: "I hate sitting next to Stevens and Ginsburg. It's like I'm in a frakkin' John Carpenter movie between the zombie and the chick whose brains he just ate."


-- Justice Thomas to himself: "Lordy, I hope that is Stevens' hand I'm feeling."

#10: "Looks like we have two choices left: fifty-fifty or phone a friend."


#9: Ginsburg demonstrates she can also sleep while standing.


#8: Though his peers had stopped caring long ago, Clarence was still embarrassed by his sagging jowls.


#7: GINSBURG: "My 'Stare of Death' will incinerate anyone who ignores foreign laws!"


#5: "Would someone please tell Justice Thomas to stop making those fart noises."


#4: THOMAS: "A 2 1/2 hour movie based on a Disney ride? What the Hell were they thinking? The next time I want to see a pirate movie, I'll rent The Adventures of Long Dong Silver again."


#1: Thomas ponders what horrible thing he must have done in a former life to deserve this seating arrangement.