Announcing the winners of the 52nd ever Right Place Photo Caption Contest!

Thank you to one and all who participated throughout all of our first season!

Presenting the top 30 captions for this picture from AFP/KCNA/File via Yahoo! 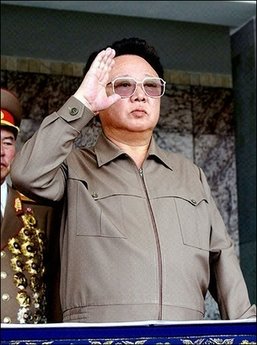 HONORABLE MENTION (And a life sentence in the gulags):


-- None of his aides dared mention that Kim Jong-Il could not do the Spock hand signal, as he exclaimed, "Rive Rong and Plosper" at the first NoKo Trekkie convention.


-- Two new animatronic characters have been added to Disneyland's "It's A Small World" attraction: Little Kimmy Crackpot and his sidekick, General Mayhem.


-- The Little General gives everyone the sign that it is now time to drink the Kool-Aid.


-- Kim celebrates his win at the annual Robot Dance-Off.


-- Kim "Elton" Jong-II accepts a nomination for the Nobel Peace Prize for his role in not starting a nuclear war in the region.

-- Yo! Kim Jong-"Illin'" and "Major Props" prepare to drop some phresh rhymes on the peops...


-- In a major fashion faux pas costing a handler his life, Kim showed up for the Axis of Evil summit in a simple tunic from the "Genocidal Dictator" line by Giorgio Armani with overstated and oversized "eye opener" shades from Louis Vuitton.


THE TOP TEN (And a date with the firing squad):


#7: Who's that behind those Foster Grants?


#6: "They call them missiles because they all miss!"


#5: Kim Jong-Il's high fives were really low fives for everyone else.


#3: Kim Jong-Il salutes the multitudes of cheering fans after his record 47 at the Masters.


And the winning entry for the final Caption Contest of Season One...


#1: ♫
I'm a little despot
Short and stout;
Here is my handle
Here is my spout;
When I get all steamed up
I will shout:
Launch the missiles
And blast Bush out!
♫

I hereby award 5 points for this ingenious little parody...

♫
Who's the Korean Lunatic
That's a sex machine to all the chicks?
(Il!)
You're damn right!

Who is the man
That would shoot off nukes at his brother man?
(Il!)
Can ya dig it?

Who's the Kim that acts insane
Who won't give back the Chinese trains?
(Il!)
Right on! 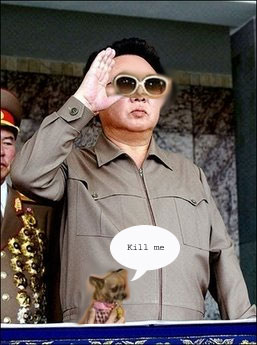 Paris Hilton called, she wants her "look" back.

[Is that his pet or his lunch? Yo quero Taco Bell spokesdog! -Mr. Right]
Bravo! Bravo!

Oh, Thank Heaven for 7/11 Edition
Fickle Finger of Fate Edition
Things Are Looking Up Edition
Rage in the Cage Edition
Not So Mellow Fellow in Yellow Edition
The Beards and the Beads Edition
Weapons of Mash Destruction Edition
You're Al I Ever Wanted Edition
His Cup Runneth Over Edition
The Eyes Have It Edition
Jeepers Veepers Edition
Huggermugger Edition
Ear's to You Edition
Heavy Medal Edition
Village of the Damned Edition
White on Rice Edition
Sunny Side Up Edition
Absentee Mallet Edition
French Tickler Edition
In Through the Out Door Edition
Frankenstein Meets Godzilla Edition
Heaven Must Be Missing an Angel Edition
Spirits of Christmas Present Edition
Dorito Bandito Edition
Shadow of His Former Self Edition
When the Saints Go Mouthing Off Edition
The Face That Sunk 1000 Ships Edition
Surely You Jest Edition
And the Camel They Rode in on Edition
Chucky Squeeze Edition
On Dangerous Ground Edition
Here's Cooking at You Edition
Catch a Falling Star Edition
Iran So Far Away Edition
Weapons of MASS. Obstruction Edition
Censure and Sensibility Edition
Big Easy Rider Edition
Acid Reflex Edition
Pride in Prejudice Edition
A Bush in the Hand Edition
Wouldn't You Give a Hand to a Friend Edition
The Forecast Calls for Snow Edition
I Shot the Sharif Edition
Giving Him the Boot Edition
Frozen Assets Edition
In Over Her Head Edition
Globe Al Warming Edition
A Thousand Points of Light Edition
All Your Fitzmas Are Belong to Us Edition
Russian Hands and Roman Fingers Edition
Junichiro Has Left the Building Edition