Announcing the winners of the 50th ever Right Place Photo Caption Contest!

Presenting the top 25 captions for this picture from AP Photo/Northside Center for Child Development, Gregory P. Mango via Yahoo! 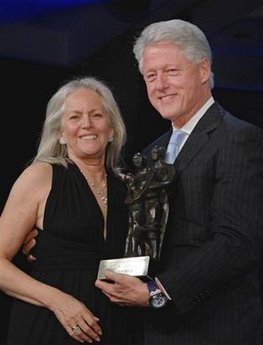 -- "You know, honey, after I'm done with that dress, it'll be a black-and-white gala, if you know what I mean."

-- "I'll buy you all the jewelry in the world, sugar. I even have a pearl necklace in store for you later..."


-- CLINTON THOUGHT BUBBLE: "Hmmmm... full-figure woman with a black dress that hides stains well... might be a good night!!!"


-- Bill, smiling in anticipation, wonders if the rug will match the drapes.


-- The recipient of this year's "Most Likely To..." award reacts to a good-natured goosing from the "Presidential Staff".


-- Proof that Slick Willy's willy isn't as spry as it used to be.

-- "Relax, baby. It's not unusual for me to find two, five, six.. or even more erogenous zones women didn't know they had."

-- "Hey, is this a Maidenform I Value Luxury™ Lace Balconette I'm feeling up? Nice."


-- "I'd like to thank the Academy for this award... and the after party favour!"

-- "Just keep smilin', honey, and be very quiet. Once we slip past Hillary, we're home free."

-- "Get the Secret Service, I'm gonna need some help getting both of these home."


#9: The remake of Grey Lady Down failed to inspire the maritime audience.


#8: "Hey, baby, these statues are just a preview; I was the first black President, after all..."


#7: The American Adult Film Association knew there was only one choice for presenting its Linda Lovelace Lifetime Achievement Award...


#6: Bill Clinton displays his pleasure at finalizing the deal that sent Hillary to the Cowboys for an old cheerleader and a statue of Tom Landry.


#5: "Nice cans. Know any convicted felons who could use a pardon?"


#1: Just seconds after this picture was taken, the Secret Service wrestled Bill Clinton to the ground for his own protection.

Stew tries his hand at photoshopping.

Oh, Thank Heaven for 7/11 Edition
Fickle Finger of Fate Edition
Things Are Looking Up Edition
Rage in the Cage Edition
Not So Mellow Fellow in Yellow Edition
The Beards and the Beads Edition
Weapons of Mash Destruction Edition
You're Al I Ever Wanted Edition
His Cup Runneth Over Edition
The Eyes Have It Edition
Jeepers Veepers Edition
Huggermugger Edition
Ear's to You Edition
Heavy Medal Edition
Village of the Damned Edition
White on Rice Edition
Sunny Side Up Edition
Absentee Mallet Edition
French Tickler Edition
In Through the Out Door Edition
Frankenstein Meets Godzilla Edition
Heaven Must Be Missing an Angel Edition
Spirits of Christmas Present Edition
Dorito Bandito Edition
Shadow of His Former Self Edition
When the Saints Go Mouthing Off Edition
The Face That Sunk 1000 Ships Edition
Surely You Jest Edition
And the Camel They Rode in on Edition
Chucky Squeeze Edition
On Dangerous Ground Edition
Here's Cooking at You Edition
Catch a Falling Star Edition
Iran So Far Away Edition
Weapons of MASS. Obstruction Edition
Censure and Sensibility Edition
Big Easy Rider Edition
Acid Reflex Edition
Pride in Prejudice Edition
A Bush in the Hand Edition
Wouldn't You Give a Hand to a Friend Edition
The Forecast Calls for Snow Edition
I Shot the Sharif Edition
Giving Him the Boot Edition
Frozen Assets Edition
In Over Her Head Edition
Globe Al Warming Edition
A Thousand Points of Light Edition
All Your Fitzmas Are Belong to Us Edition