Announcing the winners of the 51st ever Right Place Photo Caption Contest!

Presenting the top 25 captions for this picture from AP Photo/Charles Dharapak via Yahoo! 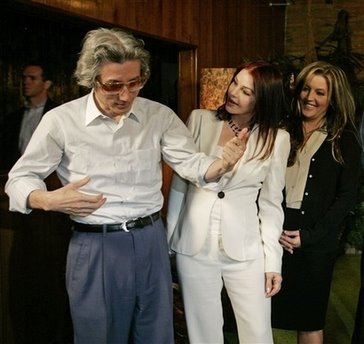 -- "Please to tell me... which way to famous commode? Tennessee sushi not sitting well on tummy..."


-- "Very nice. But if you really want to impress me, try taking a dump without dying."


-- "Are you ready to go back to the psychiatric ward, Mr. Prime Minister?"


-- After seeing that new movie with Antonio Banderas as a dance instructor, Junichiro thought learning the waltz would help him overcome some of his... shortcomings.


-- Asked about the North Korean situation, the PM burst into a particularly bad rendition of I'm Arr Shook Up.


-- "This is my impression of Elvis... singing Turning Japanese."

-- Long Duk Dong tries to impress his new American-style girlfriends with his impression of Richard Gere playing the air guitar.

-- "Do you feel the spirit of Elvis in you?"
"No, that's just the fried squid doing a number on me."


-- "Ahmadinejad is SO jealous right now. He's been dying to see the Liberace Museum ever since he was a little boy in culottes."


-- Priscilla and Lisa Marie gawk awardly at the frozen Japanese Prime Minister, who was turned to stone after looking Helen Thomas directly in the eyes.

-- "...So, once you're holding the bull's balls, you've got his undivided attention and can insert the suppository thusly."

-- "Trust me, Mr. Prime Minister, if you're going hunting with Dick Cheney, a real gun will do you no good."


#7: "It's still not as bad as when Chirac went to Broadway dressed as Carol Channing."


#1: ♫ Please to not be stepping on honorable Blue Suede Shoes ♫

Oh, Thank Heaven for 7/11 Edition
Fickle Finger of Fate Edition
Things Are Looking Up Edition
Rage in the Cage Edition
Not So Mellow Fellow in Yellow Edition
The Beards and the Beads Edition
Weapons of Mash Destruction Edition
You're Al I Ever Wanted Edition
His Cup Runneth Over Edition
The Eyes Have It Edition
Jeepers Veepers Edition
Huggermugger Edition
Ear's to You Edition
Heavy Medal Edition
Village of the Damned Edition
White on Rice Edition
Sunny Side Up Edition
Absentee Mallet Edition
French Tickler Edition
In Through the Out Door Edition
Frankenstein Meets Godzilla Edition
Heaven Must Be Missing an Angel Edition
Spirits of Christmas Present Edition
Dorito Bandito Edition
Shadow of His Former Self Edition
When the Saints Go Mouthing Off Edition
The Face That Sunk 1000 Ships Edition
Surely You Jest Edition
And the Camel They Rode in on Edition
Chucky Squeeze Edition
On Dangerous Ground Edition
Here's Cooking at You Edition
Catch a Falling Star Edition
Iran So Far Away Edition
Weapons of MASS. Obstruction Edition
Censure and Sensibility Edition
Big Easy Rider Edition
Acid Reflex Edition
Pride in Prejudice Edition
A Bush in the Hand Edition
Wouldn't You Give a Hand to a Friend Edition
The Forecast Calls for Snow Edition
I Shot the Sharif Edition
Giving Him the Boot Edition
Frozen Assets Edition
In Over Her Head Edition
Globe Al Warming Edition
A Thousand Points of Light Edition
All Your Fitzmas Are Belong to Us Edition
Russian Hands and Roman Fingers Edition