Announcing the winners of the 38th ever Right Place Photo Caption Contest!

Presenting the top 15 captions for this picture from REUTERS/Larry Downing via Yahoo! 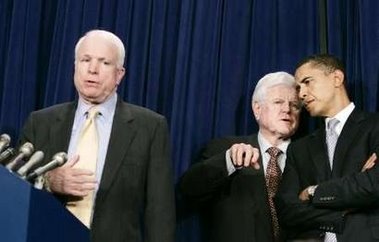 
#12: Kennedy: "Mine's the big Oldsmobile with the back seat full of Hooters carry-out boxes. There's a shiny new quarter in it for you if you bring it round for me, quick-like."


#9: "You're right, Ted! If you look into his ear you can see straight through to the other side!"


#8: "Be ready to run, young Obama. The RINO is a slow but unpredictable beast and may charge if it discovers that the cameras are not on."


#6: McCain makes the mistake of listening to his own rhetoric and is overcome by nausea.


#4: Ted: (whispering) "His mind is too developed for this subtle Jedi mind-trick, but on his bowels, it does wonders."


#3: "You see, Obama, when I turn the invisible knob this way, McCain leans to left. Now keep it a secret."


#2: "I can't believe I swallowed all of those Democratic talking points. You guys haven't got any Pepto, have you?"


#1: "I warned him that anyone who's ahead of Hillary in the polls should hire a food taster, but did he listen? N-o-o-o-o-o-o!"

Oh, Thank Heaven for 7/11 Edition
Fickle Finger of Fate Edition
Things Are Looking Up Edition
Rage in the Cage Edition
Not So Mellow Fellow in Yellow Edition
The Beards and the Beads Edition
Weapons of Mash Destruction Edition
You're Al I Ever Wanted Edition
His Cup Runneth Over Edition
The Eyes Have It Edition
Jeepers Veepers Edition
Huggermugger Edition
Ear's to You Edition
Heavy Medal Edition
Village of the Damned Edition
White on Rice Edition
Sunny Side Up Edition
Absentee Mallet Edition
French Tickler Edition
In Through the Out Door Edition
Frankenstein Meets Godzilla Edition
Heaven Must Be Missing an Angel Edition
Spirits of Christmas Present Edition
Dorito Bandito Edition
Shadow of His Former Self Edition
When the Saints Go Mouthing Off Edition
The Face That Sunk 1000 Ships Edition
Surely You Jest Edition
And the Camel They Rode in on Edition
Chucky Squeeze Edition
On Dangerous Ground Edition
Here's Cooking at You Edition
Catch a Falling Star Edition
Iran So Far Away Edition
Weapons of MASS. Obstruction Edition
Censure and Sensibility Edition
Big Easy Rider Edition