Captions Outrageous! Winners [Wouldn't You Give a Hand to a Friend Edition]

Announcing the winners of the 41st ever Right Place Photo Caption Contest!

Presenting the top 20 captions for this picture from REUTERS/Jason Reed via Yahoo! 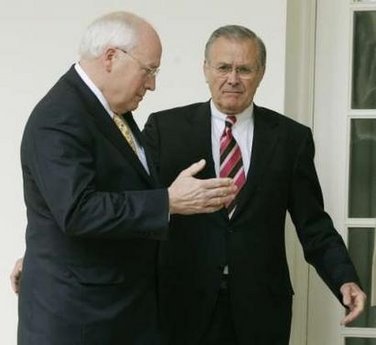 #20: "Yes, Dick, you've told me several times how you could kill Jack Bauer with your bare hands. Now come along, it's time to take your medicine."


#17: "C'mon, Don, you're gonna have to shove your hand up my a** farther than that to get the battery changed on my pacemaker."


#10: Secretary of Defense Rumsfeld begins to frisk Vice President Cheney for shotguns prior to the Cabinet meeting.


#6: The ingenious Rumsfeld Security Gate, which looks exactly like its namesake, scares away everyone but savvy insiders, like Vice President Dick Cheney.


#5: "It wasn't a day after I shook hands with Clinton that this rash set in. You have to wonder where that man's hands have been..."


#4: Cheney had a difficult time getting his new "Tickle-Me-Rummy" doll to laugh.


#3: "You don't know the half of it, Don! My advisors have now restricted me to killing quail with my bare hands!"

He's baaaaaaaack!!! Fresh from his road trip to the NASCAR event in Phoenix last weekend, Chris has given us one of his highly coveted Photoshop entries this week... 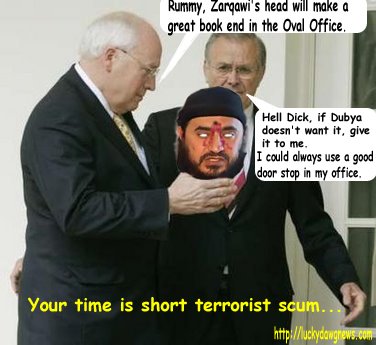 Oh, Thank Heaven for 7/11 Edition
Fickle Finger of Fate Edition
Things Are Looking Up Edition
Rage in the Cage Edition
Not So Mellow Fellow in Yellow Edition
The Beards and the Beads Edition
Weapons of Mash Destruction Edition
You're Al I Ever Wanted Edition
His Cup Runneth Over Edition
The Eyes Have It Edition
Jeepers Veepers Edition
Huggermugger Edition
Ear's to You Edition
Heavy Medal Edition
Village of the Damned Edition
White on Rice Edition
Sunny Side Up Edition
Absentee Mallet Edition
French Tickler Edition
In Through the Out Door Edition
Frankenstein Meets Godzilla Edition
Heaven Must Be Missing an Angel Edition
Spirits of Christmas Present Edition
Dorito Bandito Edition
Shadow of His Former Self Edition
When the Saints Go Mouthing Off Edition
The Face That Sunk 1000 Ships Edition
Surely You Jest Edition
And the Camel They Rode in on Edition
Chucky Squeeze Edition
On Dangerous Ground Edition
Here's Cooking at You Edition
Catch a Falling Star Edition
Iran So Far Away Edition
Weapons of MASS. Obstruction Edition
Censure and Sensibility Edition
Big Easy Rider Edition
Acid Reflex Edition
Pride in Prejudice Edition
A Bush in the Hand Edition

Here are the overall standings through the first 40 caption contests!!!