Sorry this is a little late again, but my schedule remains a bit messed up for the time being...

Announcing the winners of the 37th ever Right Place Photo Caption Contest, brought to you this week by the Cleavon Little Memorial Marching Society!

Presenting the top 15 captions for this picture from REUTERS/Sean Gardner via Yahoo! 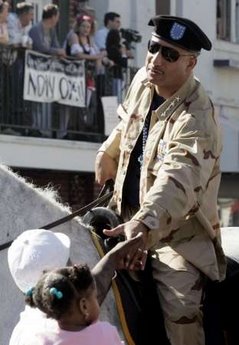 
#13: Mayor Nagin campaigns as Army Lt. Gen. Russel Honore, hoping that people will be confused enough to actually re-elect him.


#10: During Mardi Gras, Nagin plays the role of the lesser known, Fifth Horseman of the Apocalypse: Incompetence.


#6: "No, I cannot stay, there are other towns out there that need to be destroyed by my gross incompetence. Farewell."


#5: "Take back your stupid quarter and tell the kid she can't ride on the supermarket horsie ride till I'm done."

Another round of applause for "Weird Rodney" Dill, who strikes parody gold again with another witty ditty. Apparently, he already used it as an extra in one of his own contests at OTB and submitted it to a Wizbang contest, but it deserves to be seen by as many folks as possible, so I am pasting it on the front page of The Right Place for everyone to see...

I looked over Pontchartrain and what did I see
(No buses for to carry them home)*
A band of new homeless people gunnin' after me.
(bulldozers gonna bury their old homes)*

If FEMA don't get blamed ahead of me,
(for not Makin' Nawlins a safe home)*
I'll need protection from N.O.P.D
(to Make Nawlins my safe home.)*

I'm sometimes up, but I keep gettin' put down,
(for not Makin' Nawlins a good home):
Most people think I'm some Rodeo Clown
(The open range could be my new home!)*

(*sung by the chorus)

Oh, Thank Heaven for 7/11 Edition
Fickle Finger of Fate Edition
Things Are Looking Up Edition
Rage in the Cage Edition
Not So Mellow Fellow in Yellow Edition
The Beards and the Beads Edition
Weapons of Mash Destruction Edition
You're Al I Ever Wanted Edition
His Cup Runneth Over Edition
The Eyes Have It Edition
Jeepers Veepers Edition
Huggermugger Edition
Ear's to You Edition
Heavy Medal Edition
Village of the Damned Edition
White on Rice Edition
Sunny Side Up Edition
Absentee Mallet Edition
French Tickler Edition
In Through the Out Door Edition
Frankenstein Meets Godzilla Edition
Heaven Must Be Missing an Angel Edition
Spirits of Christmas Present Edition
Dorito Bandito Edition
Shadow of His Former Self Edition
When the Saints Go Mouthing Off Edition
The Face That Sunk 1000 Ships Edition
Surely You Jest Edition
And the Camel They Rode in on Edition
Chucky Squeeze Edition
On Dangerous Ground Edition
Here's Cooking at You Edition
Catch a Falling Star Edition
Iran So Far Away Edition
Weapons of MASS. Obstruction Edition
Censure and Sensibility Edition