Captions Outrageous! Winners [A Bush in the Hand Edition]

Announcing the winners of the 40th ever Right Place Photo Caption Contest!

Incidentally, I fully intend to update the current CAPHOG standings this upcoming week, so be sure to check back!

Presenting the top 30 captions for this picture from REUTERS/Kevin Lamarque via Yahoo! 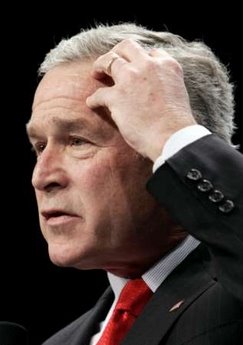 
#27: The President instinctively reached to protect his face as Dick Cheney showed off his Mossberg 835, but at the last second pretended to be scratching his head.


#25: "Ladies and gentlemen of the press, under my hand is a head. It sits on top of my shoulders. Your heads are somewhere else."


#24: President Bush rips off his mask to reveal that he is, in reality, Gordon Liddy.


#22: "No, I'm not looking forward to the next G-8 meeting. I get a splitting headache that starts right here every time I get a whiff of that reeking Chirac."


#21: "Forget shotguns, don't even give Dick a straw... we were in the White House dining room when he hit me with a spitball!"


#20: "I mean, that McKinney woman has hair growin' out all parts of her head, she looks like Don King on Hairoids."


#19: Absent a fellow primate, the President is forced to check his scalp for nits by himself.


#17: Not to be outdone by Bob Dole, President Bush got a contract as spokesman for Head and Shoulders.


#16: "I am outside minding my own business at my ranch in Crawford, Texas... and oh my goodness! Surprise!!! Cindy Sheehan and Al Sharpton are lip-locked together! If I could only remove this from my memory!"


#14: "I had that one seared... seared in my memory. Since Kerry talked about it happening to him, I wanted to experience what it felt like."


#13: "Look, you bunch of jackals, if I fire Rummy, my head will open up right about here... and then the terrorists will win!"


#9: In a moment of sheer brilliance, Karl Rove was able to photoshop out the beercan Dubya was crushing against his head, before the picture was released by the AP.


#8: "What's that, Dick? I can't hear you - I think the batteries for my top-secret speech transceiver are goin' dead on me!"


#7: After a few quick wind-ups, President Bush was ready to field the rest of David Gregory's question.


#5: "I, Bush-nac the Magnificent, will devine the answers to your questions before you even ask them."


#3: "I'm told that when Hillary threw that ashtray, it hit Bill right about here."


#2: "And I got this bruise when I failed to recognize Congresswoman McKinney at a White House dinner last week."


#1: "I'm sorry, Helen, before I can even attempt to answer your question, I gotta turn on the 'Universal Moonbat Translator' device."

Captions Outrageous! [Wouldn't You Give a Hand to a Friend Edition]

Oh, Thank Heaven for 7/11 Edition
Fickle Finger of Fate Edition
Things Are Looking Up Edition
Rage in the Cage Edition
Not So Mellow Fellow in Yellow Edition
The Beards and the Beads Edition
Weapons of Mash Destruction Edition
You're Al I Ever Wanted Edition
His Cup Runneth Over Edition
The Eyes Have It Edition
Jeepers Veepers Edition
Huggermugger Edition
Ear's to You Edition
Heavy Medal Edition
Village of the Damned Edition
White on Rice Edition
Sunny Side Up Edition
Absentee Mallet Edition
French Tickler Edition
In Through the Out Door Edition
Frankenstein Meets Godzilla Edition
Heaven Must Be Missing an Angel Edition
Spirits of Christmas Present Edition
Dorito Bandito Edition
Shadow of His Former Self Edition
When the Saints Go Mouthing Off Edition
The Face That Sunk 1000 Ships Edition
Surely You Jest Edition
And the Camel They Rode in on Edition
Chucky Squeeze Edition
On Dangerous Ground Edition
Here's Cooking at You Edition
Catch a Falling Star Edition
Iran So Far Away Edition
Weapons of MASS. Obstruction Edition
Censure and Sensibility Edition
Big Easy Rider Edition
Acid Reflex Edition
Pride in Prejudice Edition