The Day That Fitzmas Died

Not a Good Morning to be a Moonbat!

Okay. Imagine, for just a minute, that you've lost your mind. You are a committed leftist, who really and truly ought to be "committed", who's body, mind and soul have been drowned in a sea of Bush Derangement Syndrome (BDS) since the 2000 election was "stolen" by the "fascists".

How do you feel this morning waking up to the news that Santa Fitz won't be coming to your house with that KKKarl Rove indictment you've been hoping... wishing... PRAYING for (even though there is no God, of course)? Not today, not ever!

It's too much to bear! Coming just days after your heroic "Freedom Fighter" in Iraq, al-Zarqawi, was iced by Bush in a transparent attempt to rescue his falling poll numbers and kick the Haditha story off the front page... and now, THIS has to happen! Why???

Just a month ago, TruthOut.org published an exclusive scoop promising ROVE HAD ALREADY BEEN INDICTED!!! Dear, Gaia, where oh where is that valium???

IT HAS TO BE ANOTHER CONSPIRACY!!!

Take a good look at the picture below, my little DUmmies. It's a photoshop, of course, and it is the only way it will ever happen: In the world of make believe, where those of you in the "Reality Based Challenged Community" dwell... 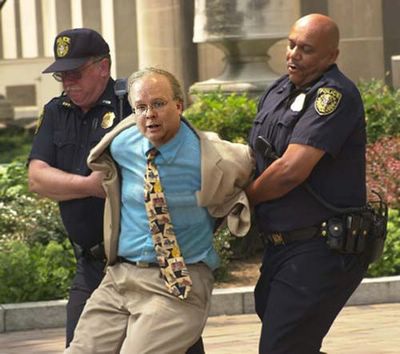 So consider this an open thread to enjoy the thrills of Schadenfreude. And if you find some delicious threads somewhere you wish to share, drop me a line via comments or e-mail and I'll post them when I can. For now, let me start us off with this...

THIS POST WILL MOST ASSUREDLY BE UPDATED... STAY TUNED!

IMAO: "Rove Is Unindicted and Out for Our Blood!"
ScrappleFace: "Rove Cleared, Zarqawi Dead, GOP Doomed"

This is a MUST READ! Pure genius, Pat!

And the hits just keep on coming! This is hilarious...