Announcing the winners of the 47th ever Right Place Photo Caption Contest!

Presenting the top 35+ captions for this picture from CP PHOTO/HO, Paramount Classics - Eric Lee via Yahoo! 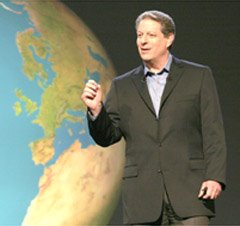 BONUS! THE WHACKO DOES YAKKO AWARD:

[ED. NOTE: Did anyone care to watch the Animaniacs video for this? I thought you might!]

[ED. NOTE: Stewie Griffin does a mean version of this video classic himself!]


-- "Why, thanks for that compliment. Many folks have told me the world has become a smaller place since I invented the Internet."


-- "While driving in my limo to my private jet, I was disgusted to see so many SUVs driven by evil rightwingers."


-- "Houston, we have some space junk above Europe... do we have clearance to obliterate from orbit?"


-- Al Gore shows that he is the center of the universe, we are all orbiting him.


-- Indisputable proof that global warming is caused by Al Gore.


-- "Welcome to the Restaurant at the End of the Galaxy. The entrée for today is a nice warmed Earth."

-- "In our international weather report, a large gaseous cloud has formed over Western Europe and Africa, but it is expected to dissipate by 2008."

-- "Actually, this world is orbiting around ME!"

-- GORE: "See, if this peninsula to my right would've just counted their votes correctly, I'd be President."

-- Quick! Give Mexico a stick and tell 'em Al's a piñata.

-- Al Gore's doctor was a tad worried about that huge, earth shaped boil growing out his side.

-- NASA releases a rather unique picture of two planets: Earth and Uranus.

-- "We told Al to lay off the helium, but nooooooooooooooooo! He just loved that squeaky voice a little too much..."

-- The United States today unveiled their new space based weapon system. Called the Super Snore, it instantaneously renders its target, anywhere in the world, comatose by exposing it to a concentrated beam of Al Gore's personality.


#9: "If nothing is done about global warming, BILLIONS of people will die over the NEXT HUNDRED YEARS!"


#8: As Al drops his drawers, the Moon in the Man becomes visible from Earth.


#7: After his Big Boy capsule got blown to bits, Dr. Evil flew away in his new Al Gore capsule, vowing to come back someday to avenge himself upon Austin Powers.


#6: Many assumed the Gore Nebula would, of course, be a bipolar emission nebula, but, in the end, scientists settled on a more appropriate choice for the Gore Nebula.


#5: Earth collectively breathed a sigh of relief as the AlGore2000 asteroid narrowly missed it.


#3: "...And so, to prevent the frozen tundra in the Canadian Arctic from becoming fertile farmland, we must immediately destroy the economy."


#1: A picture of the Earth and its Moon(bat), taken from space.

Oh, Thank Heaven for 7/11 Edition
Fickle Finger of Fate Edition
Things Are Looking Up Edition
Rage in the Cage Edition
Not So Mellow Fellow in Yellow Edition
The Beards and the Beads Edition
Weapons of Mash Destruction Edition
You're Al I Ever Wanted Edition
His Cup Runneth Over Edition
The Eyes Have It Edition
Jeepers Veepers Edition
Huggermugger Edition
Ear's to You Edition
Heavy Medal Edition
Village of the Damned Edition
White on Rice Edition
Sunny Side Up Edition
Absentee Mallet Edition
French Tickler Edition
In Through the Out Door Edition
Frankenstein Meets Godzilla Edition
Heaven Must Be Missing an Angel Edition
Spirits of Christmas Present Edition
Dorito Bandito Edition
Shadow of His Former Self Edition
When the Saints Go Mouthing Off Edition
The Face That Sunk 1000 Ships Edition
Surely You Jest Edition
And the Camel They Rode in on Edition
Chucky Squeeze Edition
On Dangerous Ground Edition
Here's Cooking at You Edition
Catch a Falling Star Edition
Iran So Far Away Edition
Weapons of MASS. Obstruction Edition
Censure and Sensibility Edition
Big Easy Rider Edition
Acid Reflex Edition
Pride in Prejudice Edition
A Bush in the Hand Edition
Wouldn't You Give a Hand to a Friend Edition
The Forecast Calls for Snow Edition
I Shot the Sharif Edition
Giving Him the Boot Edition
Frozen Assets Edition
In Over Her Head Edition