Captions Outrageous! Winners [All Your Fitzmas Are Belong to Us Edition]

Announcing the winners of the 49th ever Right Place Photo Caption Contest!

Presenting the top 25 captions for this picture from AP Photo/Ron Edmonds, File via Yahoo! 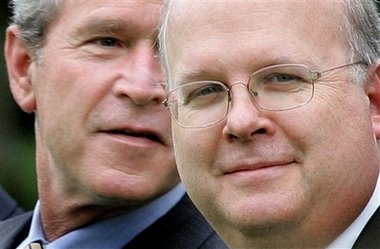 -- "Yes, he may be baby-faced, but we're talkin' Rosemary's-Baby-faced here."

-- "Karl, have you got any more Kos television appearances lined up yet? Those things are working wonders for Republican prospects."

-- President Bush and Karl Rove watch as Joe Wilson is handcuffed and frog-marched into Department of Justice headquarters.


-- "Hey, Karl! Did you hear the one about the two gay Irishmen, Patrick Fitzgerald and Gerald Fitzpatrick?..."


-- "Don't take this the wrong way, Karl, but your head is thirty pounds overweight."

-- "Remind me never to play liars' poker with you, Karl."


-- Incredibly, Bush speaks while Rove has a mouth full of water.


#9: Yesterday, the Washington press corps witnessed a partial eclipse of the son.


#7: "Mr. President, please stop blowing in my ear. You promised to make your Presidency different than the Clinton Presidency."


#6: "Karl, I know you're disappointed. All that wasted time practicing your frog march..."


#4: "Karl, knock off the Jedi Mind-Tricks and have Ann Coulter put her dress back on, it's startin' to get a bit creepy."

For anyone familiar with the origin of the whole "All your base are belong to us" theme of this contest, this piece by Stew is a must see!

♪ All the liberals pause and stare at me
My charges are dropped as you can see
They don't know just who to blame for this catastrophe!
But their one wish on Fitzmas Eve is as plain as it can be!

Gee, if they could only
Have my big smart head,
Then they could wish me
"Merry Fitzmas."

It seems so long since they could say,
"Karl Rove rotting in a prison!"
Gosh oh gee, how happy they'd be,
If they could only indict (Plame, Plame)

Gee, if they could only
Have my big smart head,
Then they could wish me
"Merry Fitzmas!" ♪

Oh, Thank Heaven for 7/11 Edition
Fickle Finger of Fate Edition
Things Are Looking Up Edition
Rage in the Cage Edition
Not So Mellow Fellow in Yellow Edition
The Beards and the Beads Edition
Weapons of Mash Destruction Edition
You're Al I Ever Wanted Edition
His Cup Runneth Over Edition
The Eyes Have It Edition
Jeepers Veepers Edition
Huggermugger Edition
Ear's to You Edition
Heavy Medal Edition
Village of the Damned Edition
White on Rice Edition
Sunny Side Up Edition
Absentee Mallet Edition
French Tickler Edition
In Through the Out Door Edition
Frankenstein Meets Godzilla Edition
Heaven Must Be Missing an Angel Edition
Spirits of Christmas Present Edition
Dorito Bandito Edition
Shadow of His Former Self Edition
When the Saints Go Mouthing Off Edition
The Face That Sunk 1000 Ships Edition
Surely You Jest Edition
And the Camel They Rode in on Edition
Chucky Squeeze Edition
On Dangerous Ground Edition
Here's Cooking at You Edition
Catch a Falling Star Edition
Iran So Far Away Edition
Weapons of MASS. Obstruction Edition
Censure and Sensibility Edition
Big Easy Rider Edition
Acid Reflex Edition
Pride in Prejudice Edition
A Bush in the Hand Edition
Wouldn't You Give a Hand to a Friend Edition
The Forecast Calls for Snow Edition
I Shot the Sharif Edition
Giving Him the Boot Edition
Frozen Assets Edition
In Over Her Head Edition
Globe Al Warming Edition
A Thousand Points of Light Edition