Captions Outrageous! Winners [In Over Her Head Edition]

Announcing the winners of the 46th ever Right Place Photo Caption Contest!

Presenting the top 30 captions for this picture from AP Photo/Manuel Balce Ceneta via Yahoo! 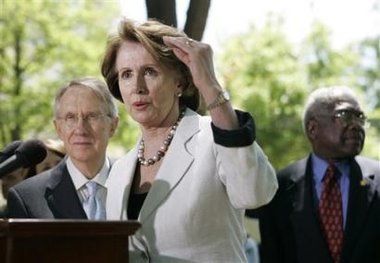 -- Both Harry Reid and James Clyburn attempt to ignore Ted Kennedy lying on the ground, peeking up Nancy Pelosi's dress.

-- "Officer, I swear, the squirrel that mugged me was THIS tall. No, I am NOT on any medications."

-- "When you pull on the little dangly thing here, the light goes on and off above Harry's head. Watch, I'll show you."


-- Nancy Pelosi, on a one-day furlough from "Happy Acres" to attend a Memorial Day picnic, gives a rousing rendition of "I'm a Little Teapot".

-- "As a Democrat, I obviously don't have anything relevant to say, so I will now use my allotted time to give you my impersonation of the yellow-throated warbler".


-- "The credibility of the Democrat Party hangs by this thread, right here."


-- "Integrity? Sure, the Democrats have integrity. We have this much!"

-- PELOSI: "We're looking to the future of Democratic leadership and we see... we see... help me here, Harry."


-- REID: (Thought bubble) "C'mon, Nancy. You haven't heard of 'shrinkage'? For Heaven's sake... they even had a SEINFELD episode on it!"

-- "How many people here think they're gonna be the next speaker of the house... not so fast, Ms. Pelosi!"

-- "Nancy Pelosi removes the last piece of feces from her hair after finally getting her head out of her a**."


#10: "I saw Rumsfeld move his hand like this and heard him yell 'cobra strike!' The next thing I knew, I woke up halfway across the room and it was dark out."


#9: "The black guy behind me? Oh, that's Patrick Kennedy, he had a costume party at the Betty Ford Clinic."


#8: During the press conference, Ms. Pelosi tried repeatedly to brush back her unsightly donkey ears, with little success.


#6: At a DNC fundraiser, Nancy Pelosi auctions off an evening of boxing in Vegas with the Senate Minority Leader.


#5: "All those Botox shots, piled up on top of each other, would reach THIS high."


#4: "Under our heightened border alert immigration plan, anyone in this country illegally, who is at least this tall, will go to the head of the line for citizenship."

REID: (Thinking) "I wonder if I can get more boxing tickets?"


#2: "You must be at least this tall, and a liberal, to try and destroy the United States of America."

Oh, Thank Heaven for 7/11 Edition
Fickle Finger of Fate Edition
Things Are Looking Up Edition
Rage in the Cage Edition
Not So Mellow Fellow in Yellow Edition
The Beards and the Beads Edition
Weapons of Mash Destruction Edition
You're Al I Ever Wanted Edition
His Cup Runneth Over Edition
The Eyes Have It Edition
Jeepers Veepers Edition
Huggermugger Edition
Ear's to You Edition
Heavy Medal Edition
Village of the Damned Edition
White on Rice Edition
Sunny Side Up Edition
Absentee Mallet Edition
French Tickler Edition
In Through the Out Door Edition
Frankenstein Meets Godzilla Edition
Heaven Must Be Missing an Angel Edition
Spirits of Christmas Present Edition
Dorito Bandito Edition
Shadow of His Former Self Edition
When the Saints Go Mouthing Off Edition
The Face That Sunk 1000 Ships Edition
Surely You Jest Edition
And the Camel They Rode in on Edition
Chucky Squeeze Edition
On Dangerous Ground Edition
Here's Cooking at You Edition
Catch a Falling Star Edition
Iran So Far Away Edition
Weapons of MASS. Obstruction Edition
Censure and Sensibility Edition
Big Easy Rider Edition
Acid Reflex Edition
Pride in Prejudice Edition
A Bush in the Hand Edition
Wouldn't You Give a Hand to a Friend Edition
The Forecast Calls for Snow Edition
I Shot the Sharif Edition
Giving Him the Boot Edition
Frozen Assets Edition