Announcing the winners of the 48th ever Right Place Photo Caption Contest!

Presenting the top 25 captions for this picture from Kevin Lamarque/Reuters via Yahoo! 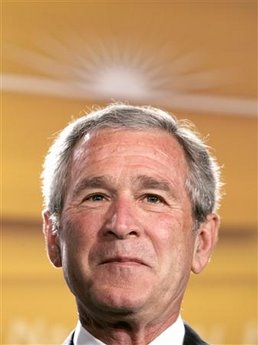 -- "What you Democrats do to your own world is of no concern to the rest of the galaxy, but if you carry your high taxes, your social engineering and your wild-eyed Senators to other planets, you will face annihilation! Come, Gort."


-- Imperial Margarine makes a comeback with President Bush on the label.

-- In an attempt to win the gay vote, President Bush dons a tiara and belts out showtunes on Oprah.


-- The lights are on, but 'guest workers' are moving into your home.


-- "Dang, I guess those Iranians were further along in their nucular program than we thought..."


-- Everyone talked about doing it, but only George Bush succeeded... IN SPLITTING ATOMS WITH HIS MIND!

-- Nothing like the death of a despicable, loathsome terrorist to brighten up your day.

#10: "I slew Hillary with my sword, and now I'm the Patron Saint of England? How does that work?"


#9: The President poses for a new image intended to replace the pyramid on the back of the one-dollar bill.


#8: Instead of just going for highlights, George decided to add actual "sun" to his hair.


#7: And that’s when Dubya got an idea; an awful idea. A terrible, wonderful, awful idea!


#6: For Democrats, the "light at the end of the tunnel" revealed a terrifying sight.


#5: George Bush did the trick where he uses his brainwaves to create light, but all the Democrats at the party complained that it leaned to the right.


#4: With the Democrats always complaining about the separation of Church and State, Bush decided to finally push them over the edge into outright lunacy.

walrus
[Ed. note: Too late! They're already there!]


#3: "No, Jeb, I ain't gonna turn around. We both know there's not a four-hundred foot tidal wave of Country Time Lemonade bearing down on me."


#2: It finally "dawns" on Mr. Bush what true conservativism means.

ONGOING:
Captions Outrageous! [All Your Fitzmas Are Belong to Us Edition]

Oh, Thank Heaven for 7/11 Edition
Fickle Finger of Fate Edition
Things Are Looking Up Edition
Rage in the Cage Edition
Not So Mellow Fellow in Yellow Edition
The Beards and the Beads Edition
Weapons of Mash Destruction Edition
You're Al I Ever Wanted Edition
His Cup Runneth Over Edition
The Eyes Have It Edition
Jeepers Veepers Edition
Huggermugger Edition
Ear's to You Edition
Heavy Medal Edition
Village of the Damned Edition
White on Rice Edition
Sunny Side Up Edition
Absentee Mallet Edition
French Tickler Edition
In Through the Out Door Edition
Frankenstein Meets Godzilla Edition
Heaven Must Be Missing an Angel Edition
Spirits of Christmas Present Edition
Dorito Bandito Edition
Shadow of His Former Self Edition
When the Saints Go Mouthing Off Edition
The Face That Sunk 1000 Ships Edition
Surely You Jest Edition
And the Camel They Rode in on Edition
Chucky Squeeze Edition
On Dangerous Ground Edition
Here's Cooking at You Edition
Catch a Falling Star Edition
Iran So Far Away Edition
Weapons of MASS. Obstruction Edition
Censure and Sensibility Edition
Big Easy Rider Edition
Acid Reflex Edition
Pride in Prejudice Edition
A Bush in the Hand Edition
Wouldn't You Give a Hand to a Friend Edition
The Forecast Calls for Snow Edition
I Shot the Sharif Edition
Giving Him the Boot Edition
Frozen Assets Edition
In Over Her Head Edition
Globe Al Warming Edition