Caption This! Winners [The Beards and the Beads Edition]

Announcing the winners of the sixth ever Right Place Photo Caption Contest! 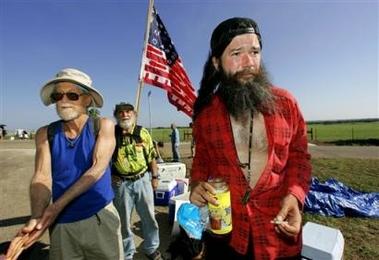 
#6: The razor and soap shortage hit Carl the hardest. However, he refused to lose his faith in America for it.


#5: No! Look! They're not extinct!! The last three Democrats in America!


#4: Guy in blue explaining why they're there to support Cindy: "I'm blind, Johnny here ain't too smart, an' poor ol' Frank back there... well he got a flag pole stuck up his butt... and it's all George Bush's fault!"


#3: Earl (left) washes his hands after loading the rectal flag launcher while Jeb (right) sites the target and James (center) prepares to launch his 'tribute to the troops.'


#2: Disconsolate after learning the "Jerry Garcia Comeback Tour" was just a hoax, Chakra, Coyote and Thyme head back to their parents' basements.


#1: The three "wisemen" arrive at Crawford to visit "Mother" Sheehan.

Oh, Thank Heaven for 7/11 Edition
Fickle Finger of Fate Edition
Things Are Looking Up Edition
Rage in the Cage Edition
Not So Mellow Fellow in Yellow Edition
Posted by Mr. Right at 8/26/2005 01:05:00 PM