Caption This! Winners [Not So Mellow Fellow in Yellow Edition]

Announcing the winners of the fifth ever Right Place Photo Caption Contest!

Presenting the top five captions for this picture [AP Photo/Lee Marriner via Yahoo!] ... 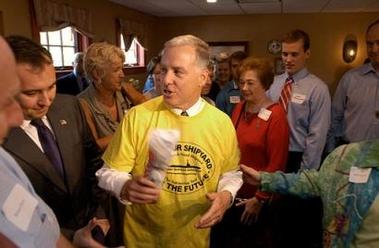 #5: The newly-elected President of the Moonbats presided over the room, symbol of his divine calling in hand.


#3: So I told Glenn Reynolds, before you put the puppies in the blender, you've gotta whop 'em over the head like this. Keeps 'em from squirming around so much.


#2: Bob, if you don't go get me some coffee, I'm gonna have to whack you with this and start screaming again.


#1: Showing the effects of years of unfettered liberalism, Howard Dean has convinced himself that he has just won the last stage of the Tour de France.

Caption This! [The Beards and the Beads Edition]