Caption This! Winners [Rage in the Cage Edition]

Announcing the winners of the fourth ever Right Place Photo Caption Contest!

Thank you to one and all who participated! For the fourth straight week, I have enough FINGER LICKIN' GOOD entries (SOMEONE had to say it...) to construct a full top ten list, so here we go...

Presenting the top ten captions for this picture [from REUTERS/Simon Kwong/Files via Yahoo!] 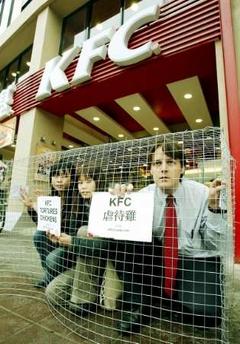 #10 (tie): Not surprisingly, anti-KFC protest lays an egg as chicken-scarfing patrons just don't give a cluck!


#10 (tie): KFC took genetic engineering of the "perfect chicken" a little too seriously.


#9: Bird Flu is rampant in Southeast Asia and calls for drastic isolation methods when spread to human victims.


#8: With the support of former President Bill Clinton, Amnesty Intenational and NOW are demonstrating nationwide to call for an end to battered women. The former President is quoted as saying, "After all, for years now I've gotten along just fine with all of mine plain."


#6: Much to their dismay, a trio of unsuspecting vegans learned what KFC really stands for: "Keeping Fruitcakes Caged"


#5: NEW at KFC: Chicken on PETA bread! Made with only the freshest ingredients.


#4: Kim and Li snickered at Steve, who was unaware that his sign translated to "I shave my chest."

Caption This! [Not So Mellow Fellow in Yellow Edition]