Captions Outrageous! Winners [In Through the Out Door Edition]

Announcing the winners of the twentieth ever Right Place Photo Caption Contest!

Presenting the top twelve captions for this picture... 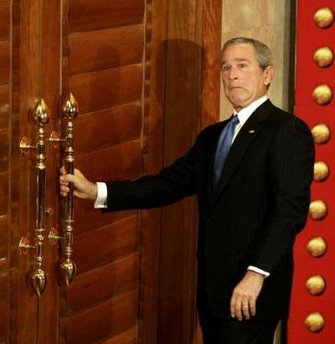 #12: President Bush reacted to a sudden burst of noise emanating from behind the door. It sounded like Tom Cruise, John Travolta, and R. Kelly, all singing "Trapped in the Closet."

Will Franklin
[For those scratching their heads right now - it's a "South Park" thing!]


#8: Although his John Kerry impression was hailed as "hilarious" and "dead-on" by his friends, President Bush finally discovered, much to his dismay, that his grandmother had been correct when she warned that his face might one day freeze in that position!


#6: "Alright, I'm gonna give you press people to the count of ten to clear out, then I'm gonna release Rumsfeld - and you might be interested to know that we haven't fed him for three days!"


#5: Trying to avoid his father's Asian faux pas, Bush runs for the door, only to find it locked!


#3: Bush realizes there may be something to this "exit strategy" talk after all.


#2: President Bush discreetly backed out of the conference room after inadvertently coming across Congressman Murtha demonstrating his "rapid pullout" stategy to Nancy Pelosi.


#1: Due the many practical joke devices made cheaply in Asia, the President fell victim to the old "electrified door handle" gag.

Chris has another very funny photoshop entry to share this week. I will again caution those of you who may be easily offended, but the rest of you can see it RIGHT HERE.

Here are the overall rankings for the first 20 caption contests!!!

Oh, Thank Heaven for 7/11 Edition
Fickle Finger of Fate Edition
Things Are Looking Up Edition
Rage in the Cage Edition
Not So Mellow Fellow in Yellow Edition
The Beards and the Beads Edition
Weapons of Mash Destruction Edition
You're Al I Ever Wanted Edition
His Cup Runneth Over Edition
The Eyes Have It Edition
Jeepers Veepers Edition
Huggermugger Edition
Ear's to You Edition
Heavy Medal Edition
Village of the Damned Edition
White on Rice Edition
Sunny Side Up Edition
Absentee Mallet Edition
French Tickler Edition