Announcing the winners of the 21st ever Right Place Photo Caption Contest!

Presenting the top fifteen captions for this picture from Gary Hershorn/Files/Reuters via Yahoo! 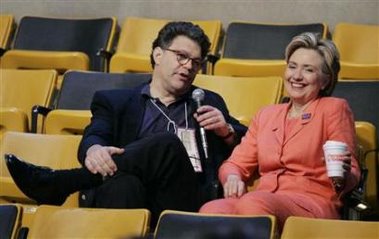 
#14: Mrs. Clinton thought a trip to Yankee Stadium would shore up her New Yorker bona fides. She didn't realize that the season had been over for two months.


#12: In a stolen moment, Franken asks a receptive Rodham, "If I told you that you had a beautiful body, would you hold it against me?"


#11: "...And then your husband asked me to crawl under his desk while Arafat was waiting outside."


#10: "Why should you dump Bill and run off with me? Because I'm good enough, I'm smart enough, and doggone it, people like me!"


#9: "Do you know what scalding hot coffee does to male genitalia, Al? Well, breathe garlic breath on me again, and you'll find out!"


#7: For want of a box of popcorn, Al Franken realizes that he has lost his one and only chance to play "jack-in-the-box" with Hillary Clinton.


#4: "An entire 6,000 seat arena takes a bathroom break at the precise moment you begin your karaoke rendition of Sometimes When We Touch? Take the freaking hint, Al!"


#3: Unfortunately, Harry "Curly" Reid was unable to make it to Media Day for the Three Stooges remake.


#2: "Thank you for that lovely rendition of Spinal Tap's Big Bottom. By the way, Al, have you ever been to Fort Marcy Park?"


#1: "Look, Al, for the last time, if I'm going to pay for advertising, I'm going to put it on a radio station that people listen to."


BONUS: A special photoshop award this week to (drumroll)... I. Ronnie! 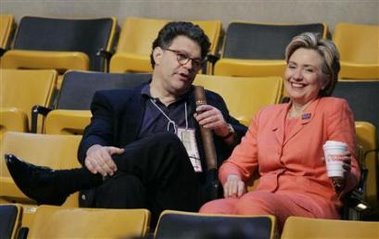 which works pretty well with #8 from above...

Captions Outrageous! [Heaven Must Be Missing an Angel Edition]

Oh, Thank Heaven for 7/11 Edition
Fickle Finger of Fate Edition
Things Are Looking Up Edition
Rage in the Cage Edition
Not So Mellow Fellow in Yellow Edition
The Beards and the Beads Edition
Weapons of Mash Destruction Edition
You're Al I Ever Wanted Edition
His Cup Runneth Over Edition
The Eyes Have It Edition
Jeepers Veepers Edition
Huggermugger Edition
Ear's to You Edition
Heavy Medal Edition
Village of the Damned Edition
White on Rice Edition
Sunny Side Up Edition
Absentee Mallet Edition
French Tickler Edition
In Through the Out Door Edition


And, in case you haven't yet seen it, here are the updated overall rankings for the first 20 caption contests!!!