Announcing the winners of the 24th ever Right Place Photo Caption Contest!

Presenting the top twenty captions for this picture from Stefan Zaklin/Pool/Reuters via Yahoo! 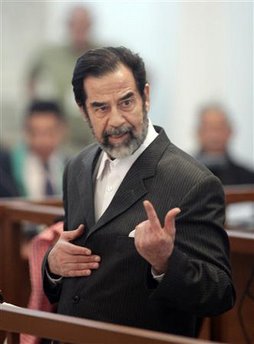 
#19: Before his overthrow, Saddam was one of the two world leaders who could simultaneously belch and sign the alphabet, the other being Gerhard Schroeder.


#15: "Hey, you want to talk torture? Just look at this suit they gave me to wear for court appearances! Right off the rack at J.C. Penney's: polyester/wool blend, stingy lapels, and three - count 'em, THREE - buttons on the cuff!"


#14: "Have you got some Maalox? Those Fritos I had before the trial gave me indigestion!"


#13: "I've been to Hell and back! Only two rations of Doritos a day, and then they send me into court without a necktie? Animals!"


#11: "Who wants to be the lucky one I wipe this presidential booger on?"


#9: Saddam tries to impress the court with his wicked air guitar technique.


#8: "I am NOT delusional... I AM the President of Iraq! If you don't believe me, I will take this gun and blow your friggin' head off!"


#6: "They say that the man who represents himself has a fool for a client. Gentlemen, I AM THAT FOOL!"


#5: "I couldn't have ever pushed the nuclear button. My finger only goes UP. Just ask my cellmate, Mahmoud."


#4: "I could not possibly have been executing my own people; I was too busy hiding my weapons of mass... Oh, crap!"


#2: "Don't you understand? I'm just a puppet! The REAL mastermind behind my presidency was that man in the balcony... Kahlil Rove!"

Captions Outrageous! [Shadow of His Former Self Edition]

Oh, Thank Heaven for 7/11 Edition
Fickle Finger of Fate Edition
Things Are Looking Up Edition
Rage in the Cage Edition
Not So Mellow Fellow in Yellow Edition
The Beards and the Beads Edition
Weapons of Mash Destruction Edition
You're Al I Ever Wanted Edition
His Cup Runneth Over Edition
The Eyes Have It Edition
Jeepers Veepers Edition
Huggermugger Edition
Ear's to You Edition
Heavy Medal Edition
Village of the Damned Edition
White on Rice Edition
Sunny Side Up Edition
Absentee Mallet Edition
French Tickler Edition
In Through the Out Door Edition
Frankenstein Meets Godzilla Edition
Heaven Must Be Missing an Angel Edition
Spirits of Christmas Present Edition