Caption This! [Things Are Looking Up Edition]

...So, I said to myself, since people seem to like it so much, why not try it again? 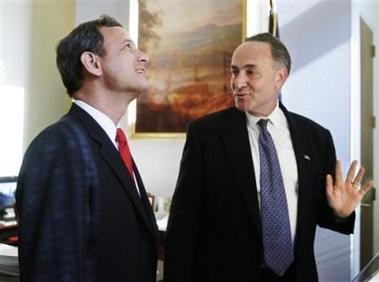 The above picture comes to us from an AP Photo/Manuel Balce Ceneta via Yahoo! It features a moment from a meeting between new Supreme Court nominee Judge John G. Roberts, Jr. (left) and Sen. Chuck Schumer (Jackass-NY) in the latter's Senate office.

Care to try and tell us what you think either or both are thinking and/or saying?

This contest will run at least one week. Good luck!

This photo caption contest is one of several featured at:

Thanks for the Link: