This week is what we in the humor end of the blogging business commonly refer to as a "target rich environment": The Day Without a Taco Bell; Mr. Moussaoui goes to jail; Patwreck Kennedy... I mean, just who do you pick out to pick on? As good as all of these schmucks might be for some yucks, I think it is this particular sack of camel caca who takes the brass ring this trip around the ol' carousel... 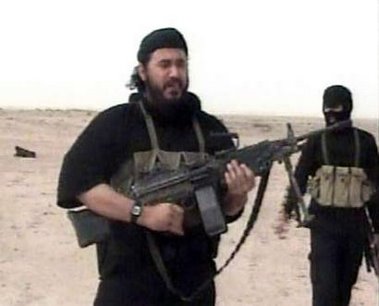 The above photo comes to us from REUTERS/Department of Defense/Handout via Yahoo!

Here's a hint, Abu. Next time it jams, stick the barrel in your mouth and suck on it for awhile as you repeatedly pull the trigger! Oh, and make sure the safety catch is off, just in case. (As Carlos Mencia might say, "Dee-da-dee!")

Say, maybe he could take some lessons from our old friend, V the K... 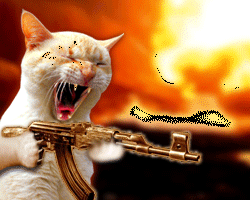 I not only like to host photo caption contests, I like to play them, too! Be certain to check out the latest contests at these great blogs...

I also must mention that not only is Charles Austin still blogging at Sine Qua Non Pundit, I also won his most recent caption contest! Yay, me!

And don't forget to check out the best caption blog in the business (where your suggestions are always welcome in the comments section, and can, if good enough, get promoted to the front page)...

Caption This! (Where V the K is back!)

Castle Argghhh!, Where they have a picture of their own in need of a good caption!