Here is the scoop: I must humbly apolgize to everyone for being so late with this week's festivities. You may read my lame excuse HERE. This week's contest will begin now and run through early next week (likely Tuesday, as I am now scheduled to work the upcoming Saturday, Sunday and Monday --- nice holiday weekend for me, eh?).

From now on, with the changes that seem to be coming to my schedule for the foreseeable future, I will try to post a new contest every Friday, which will run for 10 days with the results posted a week from the following Monday (or early Tuesday). This will bring about two contests overlapping each other every weekend. It is either that, or run a contest that is just for the weekend rather than a week, as it has always been. I will try the long way for now and see how people like it. Feel free to let me know if you would like it to run 10 days or if you would prefer me to switch to 3 day contests, as many other blogs now run. 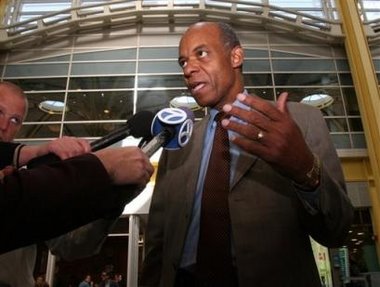 The above photo comes to us from AP Photo/Lauren Victoria Burke via Yahoo!

Ah, yes, the poster child for the Democrat Party's campaign slogan about that "Republican Culture of Corruption" himself, Rep. William "I don't know how all that FBI bribe money wound up in my freezer" Jefferson (Crooked Jackass-LA) is just too easy a target to pass up! Have at him, kids! Just remember to leave enough for the federal prosecutors to sweep up.

Gee, I wonder if he'll ask the National Guard to help him move all of his stuff to the federal pen...

I not only like to host photo caption contests, I like to play them, too! No, honest, I do... really... when I actually have the time... which is much too rare lately, but still. Anyway, be certain to check out the latest ongoing contests at these great blogs. They deserve your support.

To those whose contests I normally link to, but whom I missed this time around due to this being so late and those contests already having ended, I am dreadfully sorry. I will catch you again next time around!