After a much too long delay, here it is, at last!

Announcing the winners of the 44th ever Right Place Photo Caption Contest!

Presenting the top 50 captions for this picture from AP Photo/Jim Cole via Yahoo! 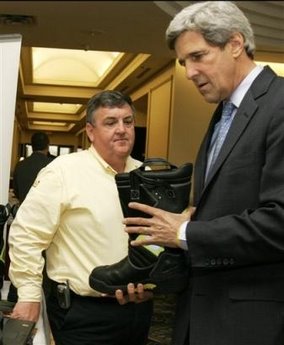 So, I said to myself, what is the point of ranking things after 10th place since it is very time consuming and yet, has no effect at all on the point standings?

From now on, in some semblance of alphabetical order by contributor, everything not in the top ten, will get...


-- "Actually, I think Teresa's looking for something a little more, y'know, spikey."


-- "Sir, if you don't stop lecturing my footwear, I'm afraid I will have to ask you to leave the store."

-- "I recall wearing boots just like these when I was raping the countryside, in a fashion reminiscent of Jen-jis Khan, in Viet Nam."

-- "I refuse to collect money at stoplight intersections with anything but the finest Italian leather."


-- "That's one of the boots I wore when I ran in the Boston Marathon... what year was that again?"

-- "Are you sure these are goose-hunting boots?"


-- "Really? How many boots do I have to lick for second on the ticket?"


-- "Oh, look. The instructions, TGIF (Toes Go In First), are written on the top. Who woulda thought?"


-- "There seems to be a stain on it. You said Bill Clinton tried this on?"

-- "I'm looking for something a little more nuanced."

-- {sniff} "Reminds me of my Christmas in Cambootia."


-- "Back in the days when I was fighting forest fires in Vietnam, I wore a boot similar to this... In fact, this is the boot given to me by a CIA Firefighter near a forest fire in Cambodia."

-- "No, Sen. Kerry, that was not the inspiration for the film Das Boot."

-- Sen Kerry after he was introduced to the ancient art of Ti Kwan Leep (Boot to the Head).

-- "Tell me again, George. Where exactly did Hillary say she was going to shove this if I ran in '08?"


-- "These coordinate divinely with my magic hat! Which I got in Vietnam, where I served."

-- "You could have told me what was on the bottom of the boot before I put my hand on it."


-- "Of course, I threw my own boots onto the White House lawn to protest my war crimes..."

-- "Hmmmm... strangely familiar. You say the voters gave me one of these before?"

-- John Kerry approves some of the costume design for his new Broadway play, Christmas in Cambodia.


-- "There you go, Senator. You had the winning bid. But why anyone would pay $135,000 for Richard Gere's gravity boots from American Gigolo, I don't understand."

-- "Then this little orange cat with a Spanish accent looked at me with these big sad eyes, but I blew him away anyway. That's how I got my bronze star."

-- "You say this is all that's left of the sonuvab*tch Secret Service guy who made me fall down on the ski slope? Well done."


-- "And I would have gotten away with it, if it wasn't for those meddlesome Swift Boat Kids!"

-- Sen. Kerry was a might uncertain on the concept of "Bootylicious".

-- "I voted FOR putting my boot on... before voting against it."

-- "You know, I am not exactly pleased with the tradition of drinking champaign from Helen Thomas' slipper."


-- "How would these go with a powder blue NASA douchebag suit?"


#10: "No, I don't think this will work. You know what I spend my time doing -- do you have anything that comes up higher? Over the knee perhaps?"


#9: John Kerry proved to be so dumb, that he didn't know how to empty a boot full of water with the instructions printed on the heel.


#6: It finally dawns on John Kerry how he got athlete's mouth.


#4: "See, John, the wide sole gives you extra stability for when you're straddling both sides of a fence."

Oh, Thank Heaven for 7/11 Edition
Fickle Finger of Fate Edition
Things Are Looking Up Edition
Rage in the Cage Edition
Not So Mellow Fellow in Yellow Edition
The Beards and the Beads Edition
Weapons of Mash Destruction Edition
You're Al I Ever Wanted Edition
His Cup Runneth Over Edition
The Eyes Have It Edition
Jeepers Veepers Edition
Huggermugger Edition
Ear's to You Edition
Heavy Medal Edition
Village of the Damned Edition
White on Rice Edition
Sunny Side Up Edition
Absentee Mallet Edition
French Tickler Edition
In Through the Out Door Edition
Frankenstein Meets Godzilla Edition
Heaven Must Be Missing an Angel Edition
Spirits of Christmas Present Edition
Dorito Bandito Edition
Shadow of His Former Self Edition
When the Saints Go Mouthing Off Edition
The Face That Sunk 1000 Ships Edition
Surely You Jest Edition
And the Camel They Rode in on Edition
Chucky Squeeze Edition
On Dangerous Ground Edition
Here's Cooking at You Edition
Catch a Falling Star Edition
Iran So Far Away Edition
Weapons of MASS. Obstruction Edition
Censure and Sensibility Edition
Big Easy Rider Edition
Acid Reflex Edition
Pride in Prejudice Edition
A Bush in the Hand Edition
Wouldn't You Give a Hand to a Friend Edition
The Forecast Calls for Snow Edition
I Shot the Sharif Edition