Announcing the winners of the 42nd ever Right Place Photo Caption Contest!

Presenting the top 25 captions for this picture from REUTERS/Jim Young via Yahoo! 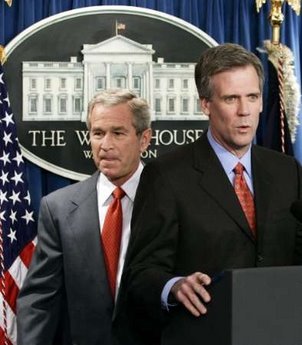 Rodney Dill riffing on the sign behind Bush's head.
(Note: If you read the whole sign as it is in the picture, you get this: "The W House won"!)


#25: And we always thought that it was Clinton who had the wandering hands...


#24: President Bush tries out his new ventriloquist act on the Washington Press Corps.


#23: President Bush stifles a laugh as Tony Snow does an impression of Stephen Colbert back when he was still funny.


#22: "Watch this, Tony. I'm goin' to catch David Gregory right between the eyes with my chaw!"


#19: "Mr. Gregory, what you've just said is one of the most insanely idiotic things I've ever heard. At no point in your rambling, incoherent question was there anything that could even be considered a rational thought. Everyone in this room is now dumber for having listened to it. I award you no points, and may God have mercy on your soul."


#17: "Yup, Tony, the only known method for dealing with Helen Thomas is to suck your balls into your body cavity, you'll get the hang of it."


#16: "Now remember, Tony --- no sudden moves, keep your feet and hands at the lectern at all times, and everything will be all right..."


#14: BUSH: "Sorry about the cold hands there, Snowball, but the exam's about over."
SNOW: "Did'ja get the whole fist in there, Georgie?"


#11: Although he had been warned about them well in advance, nothing could have prepared new White House Press Secretary Tony Snow for his first "Presidential Reach-Around".


#9: Only too late did Snow realize one of his duties would be to throw himself on Helen Thomas if she started undressing while Bush was in the room.


#7: BUSH: "Tony, I think you're about a quart low."
SNOW: "With all due respect, Mr. President, please remove your finger from there."


#6: "Don't pay no mind to this little 'letter opener', Tony; you go right ahead and say what you want to say."


#4: "Tony, it will work better if y'all lose that Scott McClellan 'deer-in-the-headlights' look."


#3: "Mr. President, my doctor said the colonoscopy was normal. I don't need your personal examination."


#2: "...And also, President Bush has signed Executive Order 542, giving me permission to slap David Gregory with the back of my right hand any time he asks a stupid question."

Oh, Thank Heaven for 7/11 Edition
Fickle Finger of Fate Edition
Things Are Looking Up Edition
Rage in the Cage Edition
Not So Mellow Fellow in Yellow Edition
The Beards and the Beads Edition
Weapons of Mash Destruction Edition
You're Al I Ever Wanted Edition
His Cup Runneth Over Edition
The Eyes Have It Edition
Jeepers Veepers Edition
Huggermugger Edition
Ear's to You Edition
Heavy Medal Edition
Village of the Damned Edition
White on Rice Edition
Sunny Side Up Edition
Absentee Mallet Edition
French Tickler Edition
In Through the Out Door Edition
Frankenstein Meets Godzilla Edition
Heaven Must Be Missing an Angel Edition
Spirits of Christmas Present Edition
Dorito Bandito Edition
Shadow of His Former Self Edition
When the Saints Go Mouthing Off Edition
The Face That Sunk 1000 Ships Edition
Surely You Jest Edition
And the Camel They Rode in on Edition
Chucky Squeeze Edition
On Dangerous Ground Edition
Here's Cooking at You Edition
Catch a Falling Star Edition
Iran So Far Away Edition
Weapons of MASS. Obstruction Edition
Censure and Sensibility Edition
Big Easy Rider Edition
Acid Reflex Edition
Pride in Prejudice Edition
A Bush in the Hand Edition
Wouldn't You Give a Hand to a Friend Edition