NOTE: The Right Place is not responsible for anyone who loses their cookies on the Tilt-a-Whirl!

Carnival of Comedy #25 at This Blog Is Full Of Crap

Carnival of Crazy VIII at File It Under...

Carnival of Satire #5 at the skwib

Carnival of the Insanities at Dr. Sanity

OTB Caption Jam at Outside the Beltway

Carnival of Classiness at WILLisms

Carnival of the Vanities at The World According to Nick

Bonfire of the Vanities at Free Money Finance

And last, but certainly not least...

Carnival of the Clueless #18 at Right Wing Nut House

The Carnival of the Clueless was a day late being posted this week. "Why?" You ask. Well... we've all heard the one about "the dog ate my homework," but c'mon, Rick... "the cat ate my carnival"??? Be sure to read the carnival intro for the sordid details!

Congratulations to our dear friend Lorie Byrd of PoliPundit and Byrd Droppings fame, for her recent appearance on CNN! As you might expect, Ian of The Political Teen has the video!

Congratulations to Ferdy the Conservative Cat and his good friend Bruce on their First Blogiversary this past week! Among their finest moments, the Carnival Submit Form certainly stands out as a major contribution to the blogosphere! Way to go guys!

Congratulations are also in order for Hoodlumman, Rob and the rest of the gang at File It Under..., as FIU welcomed its 25,000th visitor last week! The way that fantastic blog is growing, they'll hit 50k in no time! Be sure you're one of them!

Got any news of your own? Be sure to share it with us all in the comments section.

Looking for some laughs?

Buckley F. Williams of The Nose on Your Face has some good fun in store for you with a couple of his patented "Top 9" lists: Top 9 PETA Comic Book Titles, and, in keeping with the season, Worst Halloween Costumes of All Time.

Hey, I think people are beginning to catch on to Karl Rove's evil weather machine plot! Check out the details at GOP and the City with Plame It on the Rain and the explosive follow-up, Karl Rove's Weather Generator Storage Center, complete with photographic evidence!

FIU is on the case as well with Bush, Rove Redouble Efforts

To see the latest photograph of the most recent evil spawn of this device, check in with Jeanette at Oh How I Love Jesus for an exclusive look! (h/t Lorie Byrd)

For an in-depth look at the high standards of our nation's higher education system, be sure to check in with John Ruberry at The Marathon Pundit for his inside look at the King of the Moonbats, Ward Churchill, and his university funded visit to DePaul this past week. What a disgrace! (Scroll down the page, there are all kinds of great posts about this disgusting event.)

Next, check out what the Political Teen found - a former Professor who is openly calling for - are you ready for this - the extermination of all white people! Just don't compare him to Hitler or the Nazis, that's reserved for George W. Bush and the Republicans! [/sarcasm off]

Rick Moran at Right Wing Nut House has two great articles about the revelations this past week regarding Syria's role in the assassination of an opposition leader in Lebanon:
Syria and the Hariri Conspiracy
Reaction to the Mehlis Report


Gateway Pundit offers a great look into some of the funny business involved in the DeLay indictment:
Significant Relationship between Ronnie Earle & Soros!


Meanwhile, Bullwinkle at Random Numbers wants to see someone go after Mr. Earle:
Putting Ronnie Earle in His Place


Oh, and don't you just love the irony! The left was all set to use the Tom Delay mugshot for their nefarious purposes and he sticks it to 'em with a smile! Say cheese! You could even say it was... suitable for (ahem!) "framing"... 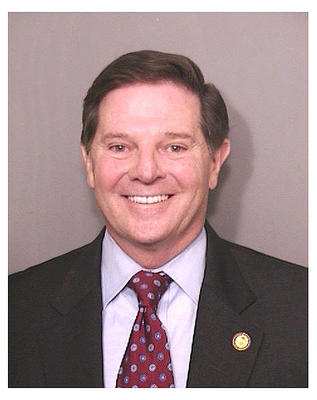 (Stolen from The Smoking Gun)

UPDATE 10/25:
Oops! I meant to include this in the DeLay links and goofed! Ken McCracken has come up with a great new feature over at his new home, WILLisms. Be sure to check out his Pundit Roundtable with a terrific sampling of blogger opinion on the whole DeLay/Earle situation. It is quite good!


Bohemian Like You at Where Have You Gone, Ronald Reagan? takes a hard look at the truth behind the left's demonizing of Senator Joseph McCarthy and George Clooney's latest Hollywood fairy tale on the subject:
Clooney Wrong - McCarthy Right


Jayson Javitz of PoliPundit has a great round-up of GWB's second term accomplishments to date (lest you be distracted by the media's apocalyptic take of late):
270 Days


And Rick Moran weighs in on the same subject twice:
Ready...Set...Indict!
Fitzgerald to Shoot the Horse After the Barn Door Was Already Closed


Meanwhile, via NewsMax, someone at the NYT seems to think Fitzgerald will drop everything. (h/t THIRDWAVEDAVE)


Whatever is going to happen with that Grand Jury, we should know by week's end!


As for the Miers nomination... let's just say you can find your fill of it everywhere you look!