Announcing the winners of the fifteenth ever Right Place Photo Caption Contest!

Presenting the top twelve captions for this picture [stolen from Everything Is Wrong]... 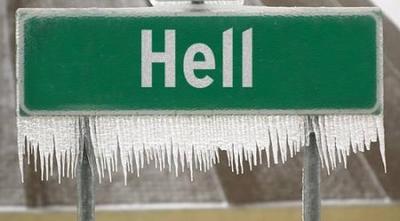 #12: French forces led a heroic attack on a terrorist training camp in Iran today, after an announcement that they could no longer wait on the sidelines while the people who had twice liberated them in the last century bore the expense in both lives and money to keep the rest of world safe.


#10: "Wow! It is so much easier getting here since Ted Stevens had that bridge built."


#9: Daily Variety has just announced that Hollywood plans to make a 9-11 movie in which the bad guys are Islamic Terrorists.


#8: It appears that Rush Limbaugh was absolutely correct when he stated the conditions required to get Harriet Miers confirmed.


#7: Tonight on Lifetime, a woman is portrayed in a healthy relationship with a sober, responsible man...


#6: Dan Rather: "Well, I'll be horn-swaggled! Them Bush Guard documents are fake after all!"


#5: Apparently, scientists haven't quite nailed down this "global warming" theory just yet. Increased funding for 2006 has been requested in light of the latest atmospheric developments.


#2: Tiring of hurling hurricanes at the Gulf Coast, Bush turns his attention to more nefarious activities.


#1: Looks like Bill Clinton's gonna get lucky with Hillary tonight!!!


NOTE: Some of you may have noticed that I used this photo in my White Sox World Series victory post. To be honest, that is the reason I snagged it in the first place, just in case! Using it for the Caption Contest was only an afterthought when someone else went with the picture I had originally planned on using. In retrospect, I'm glad I used this one - the responses were a whole lot of fun! Thank you all for playing!

Oh, Thank Heaven for 7/11 Edition
Fickle Finger of Fate Edition
Things Are Looking Up Edition
Rage in the Cage Edition
Not So Mellow Fellow in Yellow Edition
The Beards and the Beads Edition
Weapons of Mash Destruction Edition
You're Al I Ever Wanted Edition
His Cup Runneth Over Edition
The Eyes Have It Edition
Jeepers Veepers Edition
Huggermugger Edition
Ear's to You Edition
Heavy Medal Edition