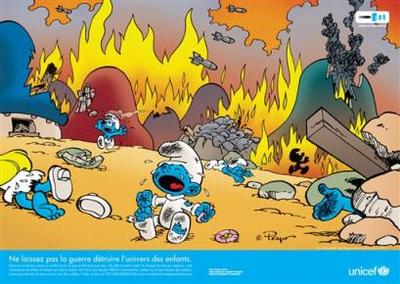 In a bold and stunning move, U.S. President George W. Bush declared war on the Smurfs earlier today, claiming it was yet another facet of the Global War on Terror. When footage of the bombing raid on the Smurf Village was televised in Belgium, images of dead and dying Smurfs, including a badly burned Baby Smurf, caused an immediate condemnation of America, the 543rd such condemnation from a European country this week, but only the 18th from anywhere other than France. The United Nations International Children's Emergency Fund, UNICEF, soon began using the footage in a new anti-war fund-raising campaign.

Left-wing bloggers were quickly flooding the Internet with their take on the reasons for the attack. Many of those theories centered on the United States' aversion to the Smurfs' well-documented Marxist lifestyle; widespread rumors about Smurf Satan-Worshiping tendencies that had first spread throughout Latin America in the early 1980's; President Bush's personal objection to homosexuality, which was believed to be rampant among the nearly-all male Smurf population; or moral objections to cloning, which many believed to be their only effective method of reproduction. The most popular theory by far, however, had to do with Haliburton and the Smurfs' rich deposits of mushroom oil.

Rev. Jesse Jackson was among those who were quick to condemn the White House, "This is clearly nothing more than another attack on people of color, in this case blue," said Rev. Jackson, who badly bruised his left knee while tripping over himself in a rush to find the nearest television camera.

Secretary of Defense Donald Rumsfeld attempted to clear up the situation in a press conference at the Pentagon a short time ago.

Let me dispel all of these ridiculous rumors being thrown around out there right now with such reckless abandon. The truth of the matter is, we had evidence, much of which the President will make plain tonight when he addresses the nation, of a clear and immediate threat against the United States. The plot was uncovered after the capture of a Smurf cell in the Los Angeles area late last week, which included such diabolical individuals as Brainy Smurf, Handy Smurf, Grouchy Smurf and Jihadi Smurf. These individuals were laying the ground work for a horrific attack using Weapons of Mass Desmurftion, which had the very real possibility of killing millions of innocent Americans.

Most Americans still view the Smurfs as the same cute, harmless little creatures from the television show that ended more than 15 years ago. Nothing could be further from the truth. In the years that have followed, their society suffered terribly from the lost television and merchandising revenue and they became increasingly radicalized, particularly after embracing Wahhabism several years back. How many of you know that Smurfette had recently been publicly whipped for having her burka slip and show a tiny portion of her ankle? Or that Vanity Smurf and Dreamy Smurf had been hung last year for committing acts of homosexuality? Let me assure you this attack was both necessary and justified.

The war criminal Gargamel W. Bushitler must pay for his smurfrageous and smurflegal attack on our smurful little village! Smurf you, Chimpy! We will see you smurf in Hell! The United States of America must smurf - and Allah willing, smurf it will! We will smurfvail! Allah Smurfbar!

And don't miss this great piece of satire at...
A Healthy Alternative to Work

Or feel free to check out our Main Page or our latest Photo Caption Contest. Thank you for visiting The Right Place!

Carnival of Comedy #24 [Oz Edition] at for blogging out loud
Carnival of Satire #4 at the skwib
Carnival of the Clueless #17 at Right Wing Nut House
Carnival of Crazy VIII at File It Under...

Go forth and check out some more of the great posts linked within these fine events.

This post has been submitted to the following open trackback parties...