Announcing the winners of the fourteenth ever Right Place Photo Caption Contest!

Presenting the top ten captions for this picture [AP Photo/Kevin Rivoli via Yahoo!]... 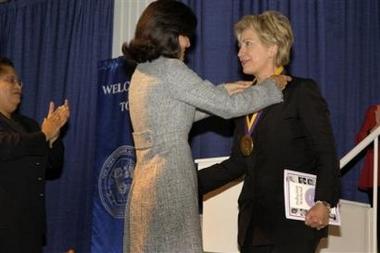 The "Two Bloggers, One Mind" Award goes to the following two simultaneously submitted entries (you can check the time stamp in the original comments section - too funny!)...


Condoleezza Rice strangles Hillary Clinton to death in yet another brilliant manifestation of the policy of preemption.


Great minds think alike! And now, on with the countdown...


#9: Thought bubble over Hillary's head: "So, Bill thinks he's better at getting the attractive young women? This one has a better figure than that Lewinsky chick."


#8: "Now, Hillary, this is very important. When you get up on the chair, hook the other end of this to the ceiling, then step off the chair."


#7: Never one to miss a fundrasing opportunity, Hillary helps herself to the "soft money" of the award presenter.


#6: Hillary is inducted into the White Trash Women Hall-of-Fame. Her induction was based on her sticking by her man after each case of rape and cheating came to light. (She is a beacon of hope for all women.)


#5: Hillary Clinton is awarded the Order of Lenin (Second Class).


#3: Hillary Clinton, shown here getting the gold medal in the Cattle Futures Trading Olympics, winks and deftly slips her room key into the presenter's purse, a sure sign she's willing to "go for the gold" again.


For even more funny business, check out Caption This!, where this photo gets further treatment from the very funny V the K!

Oh, Thank Heaven for 7/11 Edition
Fickle Finger of Fate Edition
Things Are Looking Up Edition
Rage in the Cage Edition
Not So Mellow Fellow in Yellow Edition
The Beards and the Beads Edition
Weapons of Mash Destruction Edition
You're Al I Ever Wanted Edition
His Cup Runneth Over Edition
The Eyes Have It Edition
Jeepers Veepers Edition
Huggermugger Edition
Ear's to You Edition
Posted by Mr. Right at 10/21/2005 05:06:00 PM