I just got word from Mr. Right that until the end of the month, I'll be handling Caption Contest Duties, and fortunately this picture fell in my lap. It comes to us from Reuters vis Yahoo! 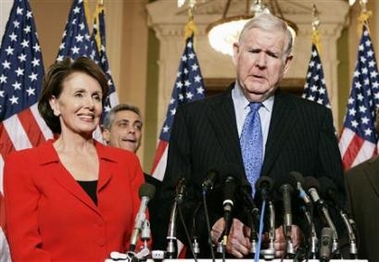 Also, I'm not only hosting this caption contest, I'm hosting a contest at GOP and College as well! Be sure that that is your next stop on the web.

Also, we not only love hosting contests, but we enjoy giving our blogger buddies a laugh with our entries in their contests. So please be sure to stop by there as well.

Dear beloved CAPHOGs, I must humbly apologize for shirking my duties lately, but I am afraid that I am going to have to delay my return to the helm of the caption contest for another couple of weeks.

I never intended to be gone so long, but after managing to keep the contest running uninterrupted for 66 straight weeks, a series of unrelated events have been running interference between me and my beloved photo caption contest!

Week 1: I wanted to shorten the time from start to finish of our contests from the ridiculous week and a half it had been running to less than a week, so I asked GOPAC to help out so that I wouldn't have to chose between skipping a week and having two contests to judge while trying to prep my research heavy Congressional ratings post.

Week 2: Blogoweeniversary II, an immense undertaking that also ended up involving my creating a shadow blog and having it ready to roll out just in case Blogger hadn't cleared up a series of technical problems in time for the big event. Once again, GOPAC did a magnificent job of standing in.

Week 3: Instead of spending time on the contest, I felt I could make a more important contribution by working with the GOP GOTV effort. I actually helped out in a rare case of a GOP win in one of the most hotly contested races in the country! Mission accomplished, but a somewhat hollow victory in the end. Again, kudos to GOPAC for saving our contest.

Week 4: Physically and mentally drained, I spent the last week avoiding most things like blogs, talk radio and news in order to avoid becoming some twisted conservative version of a Moonbat, obsessed with losing and angry at the world. After all, there are other things in life. Again, GOPAC to the rescue!

Feeling refreshed, I have begun to once again dip my toes back into the waters, but...

Weeks 5-6: I have now been slapped with a combo of extra hours at work and family obligations on the wrong days... the very days I would normally use to prep and then judge the contest! Aaarrrggghhh!!!

So here is the scoop: I am giving up on November and turning the helm over to GOPAC for the next couple of weeks. I will try, schedule permitting, to return to hosting the contest in December if at all possible. I will return, folks, just not as soon as I'd like!

In the meantime, please continue to support GOP & College and his usual, marvelous job of giving us all a contest to play during my extended absence. I really can't thank him enough for all he has done, and I really can't thank all of you enough for your patience, understanding and razor sharp wits that make our contests so very special!